As per the latest reports of Stats NZ, the September 2021 quarter witnessed a decreased volume of building activity across the Kiwi nation, i.e., it dipped by 8.6% in the said quarter when compared to preceding quarter majorly because of nationwide restrictions and lockdowns.

Also, both residential, as well as non-residential building activity declined by 6.4% and 12%, respectively, in the September 2021 quarter.

On this note, let us look at the top NZX infrastructure stocks. 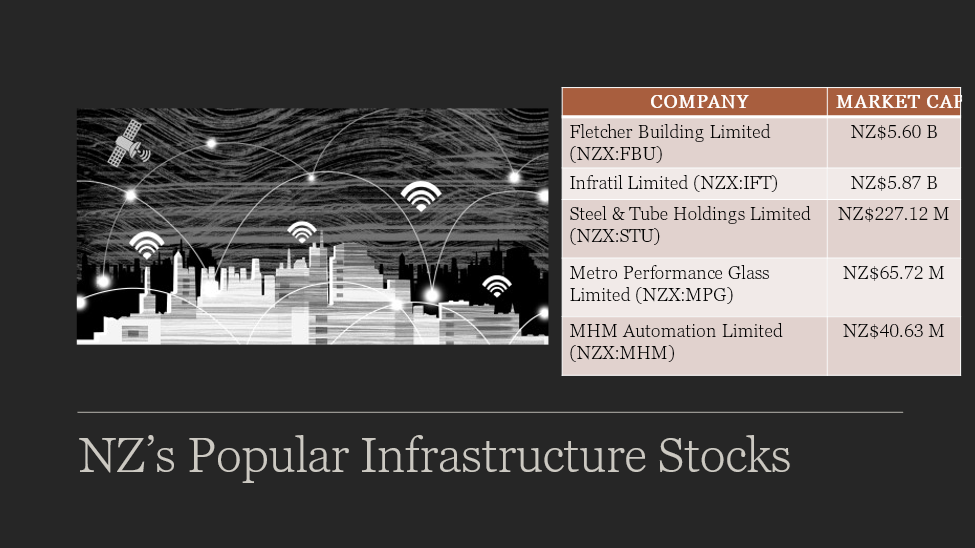 Fletcher Building Limited is a big name across New Zealand's construction and infrastructure sector. In its recently held 2021 Annual Shareholders' Meeting, the Company passed resolutions related to the re-election of its directors, namely, Doug McKay, Rob McDonald, and Cathy Quinn.

Moreover, FBU's shareholders have authorised their directors to fix the auditor’s remuneration.

Infratil Limited is a major operator of infrastructural businesses across the country. Recently, the Company revealed the resetting of the interest rate payable on its IFT bonds to 3.14% p.a.

Related Read: Infratil (NZX:IFT): How did it perform in the interim results?

Infratil has stated that the said interest rate would be effective from 15 November onwards.

Steel & Tube Holdings Limited is engaged in the production and distribution of steel products across Kiwiland. A few days back, the Company announced an incentive scheme so as to encourage its staff members for getting vaccinated.

The said incentives were offered in the form of the Company's shares, and a number of employees availed the opportunity.

Must Read: What has been last 6-month returns for 5 NZX penny stocks?

Its 1H22 revenue stood at NZ$116.9 million, which was in line with the preceding year. However, its profitability reduced to $0.4 million, majorly on account of COVID-19 restrictions being faced by the Company along with ongoing global shipping disruption.

The Company is focused on following a prudent cost strategy and product diversification so as to create a solid pipeline of work.

MHM Automation Limited is known for developing and supplying automated systems across logistics and food processing sectors. Of late, the Company had organised its ASM.

One resolution was carried out by its shareholders for the re-appointment of BDO as MHM's auditor.

Further, the directors were empowered to fix its fees and expenses.

Infrastructural stocks are vital to the country's development, for it not only progresses the economy but also offers job opportunities to thousands of people. Hence, investing in these stocks is recommended as they tend to prove beneficial in the long run.