Metlifecare Limited (NZX: MET) is a leading NZ owner and operator of retirement villages, providing rewarding lifestyles and outstanding care to more than 5,600 kiwis. Talking about the financial performance for FY 2020, the company posted robust operating performance, and achieved underlying profit before tax amounting to $93.8 million, which was marginally below the last year's record.

The company stated that result was supported by an uplift in the operating revenue, which rose by 8% to $134 million, because of continued care growth as well as higher deferred management fees. It was also mentioned that robust net operating cash flows were utilised towards investing in the property improvements as well as development projects across the year.

Metlifecare entered into a Scheme Implementation Agreement (SIA) under which EQT, which is a European investment company, would acquire all Metlifecare’s shares for $7.00 per share.

The transaction was supposed to be implemented by a scheme of arrangement, a court-supervised process where a meeting of shareholders occurs to vote on the transaction. The scheme was subject to conditions like High Court approval, shareholder approval and Overseas Investment Office consent.

In March, Metlifecare noted some risky comment about SIA but confirmed that the SIA contains limited termination events. Later during the month, APVG advised MET that it is monitoring COVID-19 pandemic situation in NZ.

However, in the release dated April 8, 2020, it was mentioned that MET received notice of an intention to terminate the SIA with Asia Pacific Village Group Limited (APVG) in ~10 business days.

As per the release dated July 10, 2020, MET entered into a new SIA where APVG agreed to buy all the shares of Metlifecare at $6 per share. However, a split occurred between chairman of MET as well as rest of the board over $1.3 billion planned takeover. 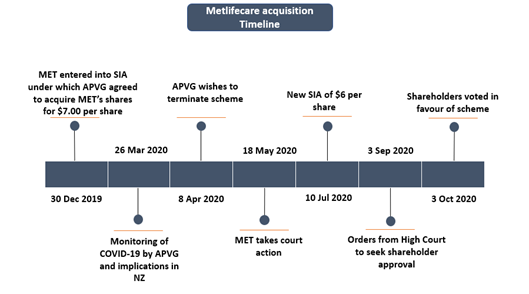 EQT offered $6 a share, at the lower end of independent report which valued MET in the range of $5.80-$6.90 per share. MET's chair, Kim Ellis, was disappointed and was of the view that the scheme price does not adequately reflects the underlying value of Metlifecare Shares.

In the release dated September 3, 2020, MET has confirmed that it has been granted initial orders from High Court to seek shareholder approval of scheme of arrangement with APVG. Notably, scheme consideration was NZ$6.00 a share.

Shareholders of MET Voted in Favour of the Takeover

As per the release dated October 2, 2020, shareholders in MET have voted in favour of scheme of arrangement under which all the shares in the company would be acquired by Asia Pacific Village Group Limited. In the same release, it was stated that if the scheme receives the final approvals, there are anticipations that the scheme would be implemented as well as shareholders would be paid NZ$6 per share on or around October 29, 2020.

Investor Attempts To Obstruct The Takeover

On 8 October, Metlifecare revealed that a shareholder filed a Notice of Opposition to the High Court application for the Scheme of Arrangement with APVG.

MET stated that it is considering the notice and would be providing further updates on the scheme process as are suitable. The company also added that shareholders do not need to take any action at this point. Metlifecare is now preparing for High Court hearing scheduled for October 15.

MET has been advised that Takeovers Panel has deferred the decision on whether to issue a ‘no objection’ statement with regards to Scheme of Arrangement with APVG until October 19, 2020. Notably, the deferral has been caused by lodgement of the Notice of Opposition to the Scheme by one shareholder.

(Important Note: Currency is reported in NZD, unless stated otherwise).