Ryman Healthcare (NZX:RYM) is one of the leading retirement village operators in Australia and New Zealand. The Company was set up in 1984 and supports the wellbeing of over 18,000 residents and staff.

The Company owns and runs 41 villages of which 36 villages are in New Zealand and 5 are in Australia. Ryman built 736 beds and units in FY21 and has 16 sites in the pipeline. 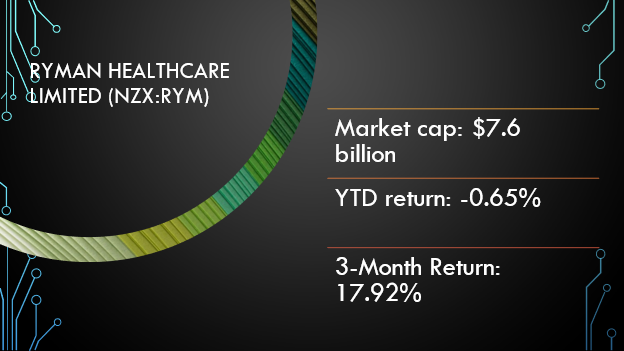 The Group aims at bringing Ryman to as many communities as possible and offering people an opportunity of quality living options for their retirement years.

RELATED READ: Which are the well-known retirement village shares in New Zealand?

Ryman witnessed many unprecedented challenges in FY21 amid COVID-19. However, the Company is now well placed for future growth with constant improvement and innovation.

Ryman witnessed an 82% rise in cash receipts on pcp to NZ$403 million in Q1FY22. The Company transacted the highest sales value and volume of occupation right agreements in Q1 with occupancy running at 97%.

In Australia, the Group acquired a new retirement village site at Mulgrave in Melbourne in July 2021.  The site covers 4.6 hectares with apartments, villas and an integrated aged care centre, and has a current consent for a retirement village development for over 350 residents.

In New Zealand, the Group is constructing across 7 sites with a pipeline of projects. The development team has also obtained resource approvals for new villages in Auckland and Christchurch.

Ryman hired new Group CEO Richard Umbers on 7 September, due to join the office on 25 October. Mr Umbers will take over Gordon MacLeod, Group’s previous CEO, who served a 15-year-term in the company.

ALSO READ: Are these 10 best healthcare companies on the NZX?

The Group has 26 villages in the pipeline, which are likely to produce NZ$5.5 billion in cash and a recurring income of NZ$420 million.

Aged care is considered as a crucial part of health infrastructure in Australia and NZ.  However, the public infrastructure continues to face pressure in NZ and Australia.