In a recent announcement, Summerset Group Holdings Limited (NZX:SUM) (ASX:SNZ), one of the biggest retirement operators in the country, cleared consent for its new NZ$150 million venture to be built in Waikato, Cambridge.

This shall be the fourth Summerset property in the Waikato Village, besides being the 35th in the country. 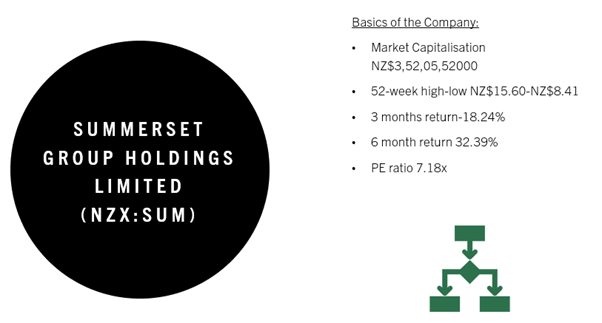 The new retirement village shall be 260 units, two- and three-bedroom cottages and villas, with fully equipped care rooms and serviced apartments to ensure that the most comfortable living conditions are provided to the residents who are often the ones in most need of care and expert medical assistance.

Read more: Summerset (NZX:SUM) Why was it granted consent for NZ$150 m?

It was further added by Aaron Smail, the General Manager for the Company, that while the construction and groundwork for the same will begin this year, the first residents at the new property are expected to move in by 2023.

There shall be a special unit built for residents dealing with Dementia, who are in need of special help and assistance.

Smail further added that several of these units should be independent, meaning that the residents would have the experience of living in their own homes, simply in a secure environment, where necessary help can be found at any given point in time.

With a number of people aged 75 years and above, it has been predicted that an increase of 44% in the next 10 years could be seen in Waipa District in demand for these kinds of aged care homes.

Summerset is known to be one of the retirement village providers promoting independent living, meaning the residents don’t feel like they have been put in a care home.

Elderly residents have their own personal space, which is just surrounded by caregivers who can reach them quickly in case of need.

Also read: Which are 5 NZX stocks with the highest monthly returns?

The structure of the Summerset Cambridge village shall be similar to Rototuna Summerset. The Company has 34 completed or ongoing properties across different parts of New Zealand and Australia.

In a separate report, there was a complaint lodged by Consumer NZ as per the Fair-Trading Act alleging that retirement villages falsely market and advertise their services and create an impression of the quarantine provision in independent living if needed, which isn’t actually the case.

Previously, the Company had announced the DRP strike price as NZ$14.7566 per share, which includes a 2% discount. Besides this, the foreign exchange rate for the dividend to be paid to its Australian investors was set at 0.9587, in regard to the dividend that was to be paid on 20 September 2021.

Related article: Which are 5 hot NZX dividend stocks to explore in September 2021?

With new Summerset retirement village development underway, the residents are expected to start taking possession by 2023.