Why are these 5 NZX financial stocks in focus in November?

As per the latest report released by the Reserve Bank of New Zealand, the nation’s financial system displayed resilience during uncertain times of the pandemic and is well placed to strengthen the country’s economic recovery.

It stated that capital requirements for banks would gradually increase from July 2022 and the Central Bank also aimed to raise the minimum CFR, i.e., core funding ratio requirement to 75% in January 2022, subject to no further deterioration of the economic environment.

Having said that, let us take a look at the five NZX-listed financial stocks before Christmas festivities begin. 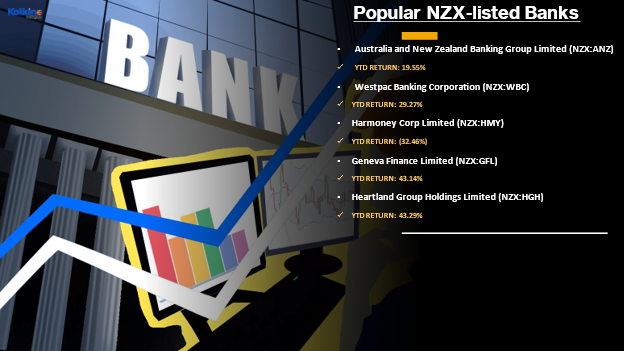 Australia and New Zealand Banking Group Limited has lately released details pertaining to its virtual AGM, which is going to be held on 16 December.

Apart from electing and re-electing its directors and business-related resolutions, ANZ intends to carry out a special resolution related to the amendment of its constitution.

Further, it has announced an on-market purchase of ANZ Shares by ANZEST Pty Ltd so as to settle employee compensation schemes.

Westpac Banking Corporation has released a report undertaken by Promontory Australia, an independent reviewer, for the period from February to September 2021.

The said report evaluates WBC’s progress related to its integrated plan to strengthen its risk governance.

Must Read: Do these 5 NZX financial stocks have healthy YTD returns?

The report states that the bank is on track with relation to its integrated plan.

This would greatly help the banking company to diversify its funding sources, thereby reducing the overall cost of funding.

Shares of Harmoney Corp was trading flat at NZ$1.93, on 10 November, at the time of writing.

Geneva Finance Limited has recently announced to distribute an interim dividend of 1.25 cps to its shareholders on 21 December.

It anticipates its six-month pre-tax profit ended 30 September 2021, to be up 21% on the preceding year due to GFL's resilient performance amid unprecedented times.

Further, another resolution was passed to entrust the Board to determine KPMG, HGH’s auditor, fees for the upcoming year.

On 10 November, at the time of writing, Heartland Group Holdings was trading flat at NZ$2.310.

New Zealand boasts a well-established financial sector which continues to support its customers as well as its economy.