As the backbone of the economy, these companies mobilise the country’s savings and investments towards productive activities, thereby enhancing the growth of the economy.

With this overview, let us take a glance at the five NZX financial stocks along with their 6 monthly returns. 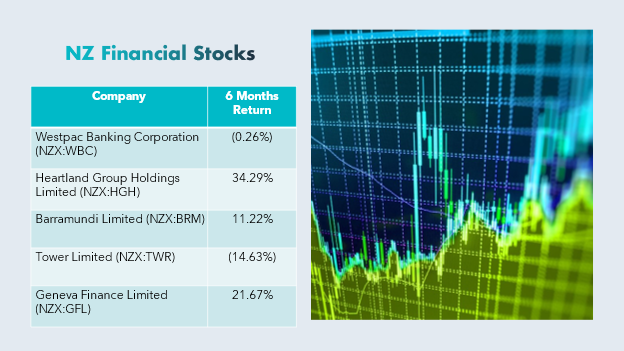 First on the list is Westpac Banking Corporation, which has recently announced the appointment of a new CEO for Westpac NZ operations.

We would now look at Heartland Group Holdings Limited since it has released its 2021 Annual Report. It gave a brief overview of its financial performance for FY21, wherein its NPAT clocked NZ$87 million during the said duration.

Further, the Company expects FY22's NPAT to be in the range of NZ$93 million to NZ$96 million.

Also, HGH has scheduled its Annual Meeting for 28 October.

Coming up next is Barramundi Limited. In its recently published Annual Report for 2021, the Company reported a net profit of NZ$52.3 million for the year ended 30 June 2021, revealing a resilient performance by the Company despite market uncertainties.

BRM has paid 6.0 cps as dividends during the year.

Also, the Company plans to hold both in-person as well as a virtual Annual Meeting of Shareholders on 15 October.

Now, we would look at Tower Limited, which has recently updated its guidance for FY21. The Company has revised its NPAT guidance from the earlier given range of $22milloin and $24 million to the new NZ$19 million to NZ$21 million.

Industry-wide inflation has greatly offset operational improvements made by the Company.

TWR would release its detailed full-year results ended 30 September 2021 on 24 November and expects to pay a dividend in line with its dividend policy.

Interesting Read: What are the top 10 NZX-listed financial companies?

Topping off the list is Geneva Finance Limited. In its recently held ASM, resolutions were passed to grant authority to the Board to determine the Company auditor's remuneration for FY22 and for the re-election of one of its directors.

At the time of writing on 28 September, Geneva Finance traded flat at NZ$0.770.

For the economic progression of a country, its financial sector needs to grow rapidly and efficiently.