Would 4 NZX travel stocks see a turnaround this year?

The New Zealand government had announced in December 2021 that it would delay plans to reopen to Australia for the 6 weeks until February 2022.

Tourism operators are looking forward to making the most of the opportunity. The island country will permit only fully vaccinated travellers, aged 12 and above, along with a COVID-19 test needed 72 hours before departure.

On this note, let’s look at how these 4 NZX travel stocks are doing. 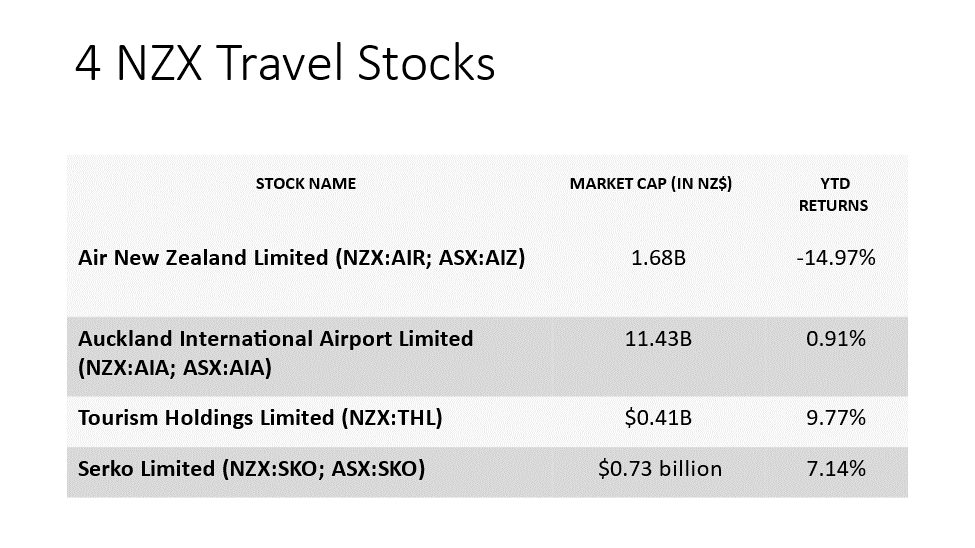 Air NZ has cancelled 120 flights through to the end of February 2022 after the NZ government announced the postponing of its international border reopening plans last month. Chris Hipkins stated that Australian travellers might have to go through isolation until the end of February.

ALSO READ: How are these 3 NZX transportation stocks doing in 2022?

The airline was selected as the safest airline in the world, beating over 380 airlines in an annual survey conducted this month. The airline has plans to get zero emissions aircraft in the coming 5 years.

GOOD READ: Would Omicron pose any threat to NZ economy?

Auckland Airport’s total passenger volumes fell by 89.1% in November on previous year. AIA’s recovery remains dependent on the reopening of the economy and more vaccinations amid new strains.

Tourism Holdings suffered a net loss after a tax of $14.3 million in FY21, down by $34.3 million on pcp. The Group’s NZ business experienced the biggest loss while Australian business fared well until June when the Delta variant struck NSW and Victoria.

The Group expects a net loss after tax in the range of $4 million-$7 million in the first half of FY22.

Serko completed its retail offer on 17 December, raising funds of $8.3 million. The offer comes as a part of the equity raising plan of Serko.

RELATED READ: Which are 2 NZX supply-chain stocks to consider in 2022?

The company aspires to redefine business travel and anticipates a fruitful year as businesses resume travel.

New Zealand has delayed its reopening plans until February 2022. The border opening plans remain dependent on the impact of Omicron on people and health systems.