Vista Group International Limited (NZX:VGL,ASX:VGL) creates technological solutions for movie studios, film distributors, cinemas, and moviegoers. Their technology is used across the globe including the US, the UK, Canada, China, and Australasia.

Since Vista Group serves customers acutely affected by the pandemic, it is helpful to discuss Vista Group before, during, and after 2020 to get a well-rounded picture of the corporation. 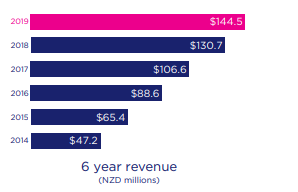 Growing their revenue at such a rate was at the expense of their earnings, as chasing growth chewed into their profit. So, while Vista has made incredible strides in increasing its revenue, the same cannot be said in regard to its earnings. In the same time frame, Vista’s earnings have remained flat, increasing from only 8.1 to 10.8 million.

It is safe to say that the movie industry as a whole had a tough 2020. Cinemas closed, film releases were delayed or moved to streaming platforms, and movie production was halted.

Vista Group’s product and services are primarily geared toward the cinema experience and thus, has seen their share price falling off a cliff. Vista Group shares were trading at $3.42 at the beginning of the year and now trade at $1.59 (closing price as on 12/01/2021).

This decline represents a 53% loss in the value of the stock YTD. Not surprisingly, Vista Group has reported a $6.5 million half year EBITDA loss for 2020, down from a profit of $11.8 million in 2019.

In a similar manner, owing to the disappointing lift in earnings, Vista Group has not been able to increase the value of the company per share. In order to raise cash during last year’s downturn, Vista group issued $65 million dollars’ worth of shares resulting in a dilution in the value of existing shares by 38%.

What is instore for Vista Group in 2021 and beyond?

Vista Group is predicting a revival of the film industry in 2021. Early indicators suggest this has already begun with at least 70% of world-wide cinema open and operating.

As a way to diversify their income stream in 2020, Vista Group accelerated the release of their streaming platform service ScreenPlus.

The platform allows local cinemas to stream their film directly into people’s homes. Vista Group was working on ScreenPlus before the pandemic hit so the viability of the product is not in question even as moviegoers return to cinemas in the near future. ScreenPlus can be considered another worthy tool in the Vista Group’s portfolio of products.

China has recently surpassed the US as the largest market for films in regard to box-office takings. Strategically, Vista Group had been steadily acquiring greater stakes in their Chinese joint venture Vista China until December 2019. This manoeuvre had positioned Vista Group to capitalise on the Chinese film market as it stands now, and as it continues to grow as predicted.