In 2020, the cumulative revenue of the NZ telecommunications retail market was nearly NZ$5.12 billion.

Further, as per reports, both mobile and fixed broadband subscribers would continue to grow during the five-year period from 2020-25, with 5G mobile subscribers expected to represent around 52% of the total subscriptions by 2025.

With this overview, let us quickly take a peek at the five telco giants operating in Kiwiland. 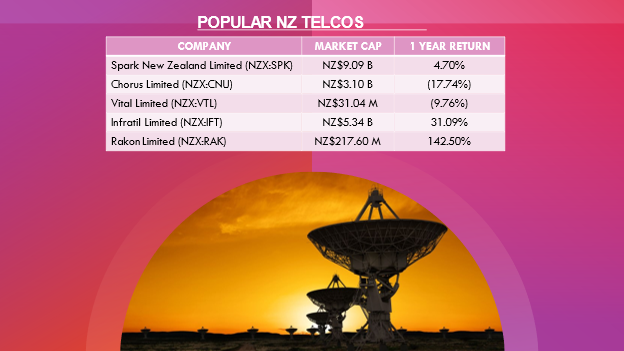 NZ’s leading telco Spark New Zealand Limited is headquartered in Auckland. The Company has notified its shareholders to conduct its Annual Meeting on 5 November.

Also, on 1 October, the Company would distribute a dividend of 12.50 cps to its shareholders.

Next is Chorus Limited, which was launched in 2011 and is headquartered in Auckland.

On 12 October, the Company will pay a final dividend of 14.5 cps, along with a supplementary dividend of 2.559 cps.

Must Read: Which are the four hot NZX-listed telecom stocks?

Also, CNU has fixed the foreign exchange rate for paying a dividend to Australian investors.

Further, the shares allotted under the Company’s Dividend Reinvestment Plan will also be issued on 12 October.

Functioning in Kiwiland for over 25 years, Vital Limited is one of the leading telcos of the country.

VTL will pay a dividend of 2.0 cps during mid-October, bolstered by new solutions on offer and a pan-country presence of its infrastructure-based projects.

Also, the last date of sending director nominations was 28 September and VTL plans to hold its ASM next month.

At the closing bell on 28 September, Vital remained unchanged at NZ$0.710.

Coming up next is Infratil Limited, which also owns telecommunication networks across the country, apart from owning airports and electricity generators.

Earlier this month, the Company announced making a capital commitment worth US$233 million to build Gurin Energy, which is a renewable energy development platform located across Asia.

It is noted that this newly established platform, will invest in the development of solar and wind energy projects pan Asia.

At the closing bell on 28 September, Infratil traded flat at NZ$8.050.

Lastly, we would look at Rakon Limited, which manufactures frequency control products to enable the meteoric speed of 5G networks. RAK has revealed the results of its Annual Meeting, wherein its shareholders passed various resolutions.

One being the re-election of its director, the second being the authorising the Board to determine the auditor's remuneration, and thirdly, to raise the overall pool for directors' fees.

At the closing bell on 28 September, its share remained constant at NZ$1.120.

Do Read: 5 NZX stocks with highest YTD returns that can be explored

With an increase in the country’s population and consequent rise in its mobile subscribers,  NZ’s telco market is forecasted to grow rapidly.