Amid increased digitalisation, telecom stocks are much in demand as they offer connectivity and allow people to stay connected. New Zealand has a mature and competitive telecom market. The country has a full-fibre wholesale broadband network and 3 network operators.

Let’s skim through how these 3 telecom stocks are performing in the market. 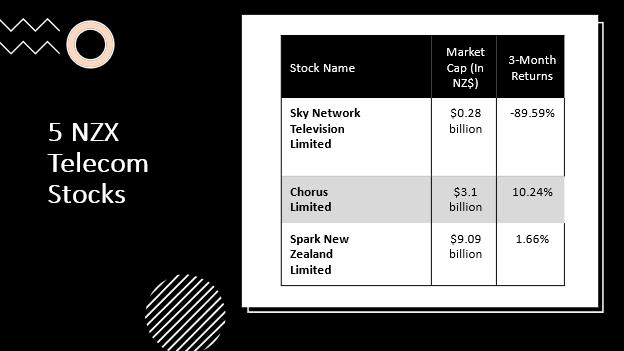 Sky Network recently declared the completion of the merger of each 10 Sky shares held on 16 September into 1 share. The total issued share capital after the alliance of shares stood at 174,688,323 shares. This was marginally greater than 174,687,956 expected before the start of the procedure.

The Group had announced the share consolidation process on 25 August and had estimated a lower number of Sky shares on issue.

Fixed line telecom network operator, Chorus, stated that fibre uptake grew to 65% in FY21 from 60% in pcp, with 120K new fibre connections due to increasing demand for high-capacity internet.

In FY21, the company reported a $12 million decrease in sales compared to FY20. However, it saw a little increase in EBIT owing to cost lowering and the absence of one-time COVID-19 expenditures in FY20.

DO READ: How are these 3 NZX communication stocks performing amid frequent internet outages?

CNU also stated that the value of fibre consumers remains dependent on Commerce Commission’s final decision on new fibre regulation, due to be finalised before 1 January 2022.

Spark NZ delivered growth of 1% in EBITDA at $1.12 billion in the second half of FY21, reporting robust growth in its core markets. However, Spark recorded a lower NPAT because of high amortisation costs and depreciation in addition to an increase in tax-related expenditure.

ALSO READ: Which are the 5 dividend-paying penny stocks on NZX?

The Group persists to invest in infrastructure with 5 services in 9 locations and rural connectivity growth. SPK declared a dividend of 12.5cps for H2 of FY21.

The telecom sector is in huge demand due to a major shift to mobile and cloud-based technology. The sector has to keep pace with the constantly increasing demand for faster data connectivity.