In the year 2008, there occurred a financial catastrophe (known as Global Financial Crisis) that shook the economy on the global level. In 2020, COVID - 19 is responsible to have triggered an economic meltdown as much as three times worse than the former one.

A crisis like no other, the ongoing pandemic had the most stable economies tumble down, the most efficient markets shut, the most profitable stocks fall and as the economists are saying, it is not over yet!

Having hit almost every sector, the COVID-19 pandemic has had deeper aftereffects than what one must have anticipated. One of such sectors hugely hit in New Zealand is the industry pertaining to dairy.

Globally speaking, approximately 3% of the total milk is produced in New Zealand and that makes the country 8th largest dairy producer in the world. It is a fact that as of now, in New Zealand, dairy cows outnumber people.

NZ presently delivers an extravagant variety of dairy items. There are numerous dairy companies operating in New Zealand. The a2 Milk Company Limited is one of those trusted producers and supplier of dairy products across the country.

About The a2 Milk Company Limited

Scientist Dr Corrie McLachlan and his partner Howard Paterson laid the foundation of the company in the year 2000. The Company largely produces natural a2 milk, as well as infant’s and children’s nutritional products.

The popular dairy company boasts of milk products with a difference. They say that their products are distinct from the usual cows’ milk because it comes from cows that are specially selected to produce only the A2 protein type of milk and not typical A1 type.

The Company has its operations mostly across Australia, New Zealand, Greater China, and the US as its largest consumer base.

Chinese consumers purchase a2 milk and other products from supermarkets and through online shopping portals. The products are sent to China directly from Australia and NZ.

Pendal Group becomes a substantial holder in a2 Milk

Recently, the Company notified the market that Pendal Group Limited became one of the substantial holders in a2 Milk, effective 28 September. Pendal Group holds 5.165% and 38,355,845 number in class.

The a2 Milk Company’s updated outlook

The New Zealand-headquartered dual-listed (ASX and NZX) The a2 Milk Company Limited (ASX:A2M; NZX:ATM), on September 28, updated its outlook for the FY21, which was previously provided in FY20 report.

The a2 Milk, in its annual report had mentioned about the ambiguity arising out of coronavirus crisis. Due to the virus and in efforts to contain it the economic activity had decelerated, which in turn affected the supply chain as well.

Despite substantial ambiguity and volatile market conditions brought upon by coronavirus crisis, the Company had provided an updated outlook, as mentioned below- 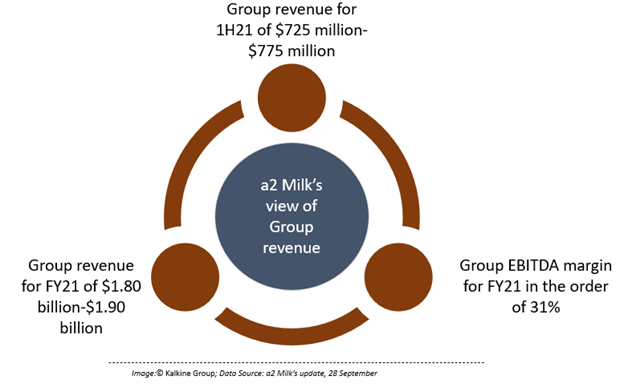 The disturbance caused to the ‘daigous’ has been affecting the sales this month and is likely to stay the same even in the first half of FY21 period. A major amount of infant formula sales in ANZ region segment is symbolised by sales in the ‘daigou’ channel, the region is at present indicating towards lower revenue for the first half period.

The a2 Milk believes that the interim effect on the ‘daigou’ channel is for some time only, the issue would resolve once coronavirus cases subsides in the Australian continent.

Daigou refers to a modern form of transborder exporting in which people outside China purchase goods for consumers in China. The unofficial daigou trading system is responsible for a considerable selling of a2 Milk’s infant formula, thereby giving a major boost to the business.

On 28 September, a2 Milk share price on ASX closed at A$15.2, down by 11.422%, decreasing its market capitalisation to NZ$12.74 billion from the earlier A$13.7billion. However, the Company expects to witness a better second half.

Why the ‘daigou’ market crash is significant?

The a2 milk Company’s interim Chief Executive Geoffrey Babidge, in his announcement on September 28, 2020, stated that the daigou channel had played a very significant part in forming a2 brand in China.

Babidge further said that the Company warned during its annual results that ongoing COVID-19 uncertainty and the potential for economic ‘moderation’ could influence supply chains.

The Company had already highlighted its concerns pertaining to its infant nutrition segment and stored food item, which might persist during FY21 as well, as a consequence of solid sales in the third quarter results, but lesser than expected sales to retail ‘daigous’ in the Australian region because of few travellers coming from China and students from abroad.

Also, a2 Milk Company Limited partly possesses shares of another dual listed (on both ASX and NZX) dairy company Synlait Milk Limited (NZX:SML). Products of Synlait Milk also depends on daigou consumers for its sales, and therefore its share price was down by 7.434% on ASX, on 28 September, following a2 Milk Company’s announcement.

Eyeing a wider market and growing business, a2 Milk sees a bullish future. The Company also laid emphasis on the fact that infant formula via ‘daigou’ is the only element of its multi-channel and multi-product sales approach in the Chinese region.

a2 Milk’s development strategy believes that both MBS (Mother & Baby Stores) and CBEC (Cross Border e-commerce) policy would signify a rising amount of its infant nutrition segment in the upcoming period. The Company also believes that the ‘daigou’ shoppers’ demand would surge in China.