Brent crude oil futures has seen a price gain of over 171.0 percent, surging from the level of USD 15.98 (intraday low on 22 April 2020) to the level of USD 43.41 (intraday high on 8 June 2020). Thanks to the rally in crude oil prices, Oil and gas sector is under a sentiment splash, and the stock prices have recovered considerably. NZX-listed oil & gas stocks such as New Zealand Oil and Gas Limited (NZX:NZO) gaining an upswing on the exchange.

The recent oil market challenges concerning demand had led to a bloodbath in oil & gas stocks and a profound impact on energy markets across the globe. The pressure on oil prices was unprecedented, so much so that the market had witnessed prices of WTI or the U.S. crude slipping to negative territory, where suppliers were actually ready to pay buyers to park some of their crude oil.

The carnage in the oil market has prompted many oil and gas companies across the exchange to notch various defence mechanisms to sail across the stormy oil market, which still remains challenging over the estimation of poor demand during the year 2020. 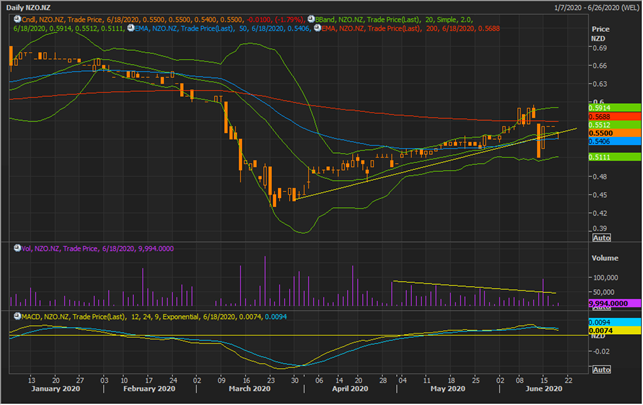 On the daily chart, it could be seen that the stock is moving in a secondary uptrend after halting the decline seen under the primary downtrend. In the recent past, the stock has breached its horizontal resistance level of $0.5081, which would now act as the primary and decisive support.

It should be noticed that the stock has given a volatility breakout after breaching the +1 Standard Deviation (SD) of the 20-day simple Bollinger band along with the horizontal resistance breakout, reflecting on the current bullish sentiments around the stock.

NZO has even breached the 200-day exponential moving average, but, is pending any crossover between the short-term (50-day) and medium-term (200-day) EMAs, reflecting on the bulls’ strength.

However, it should also be noticed that the rally is on weak volumes, which coupled with a rapid surge in price suggests a pending correction (minor trend). The 12,24,9 MACD indicator is giving a positive signal.

If the prices correct ahead or enter any minor trend into the secondary uptrend, the +1 SD followed by the mean value of the Bollinger band could act as immediate support for the stock.

As suggested above, the primary support would be at $0.5081 and it should be decisive in nature as the same level is overlapping with the support suggested by the -1 SD of the 20-day simple Bollinger band. 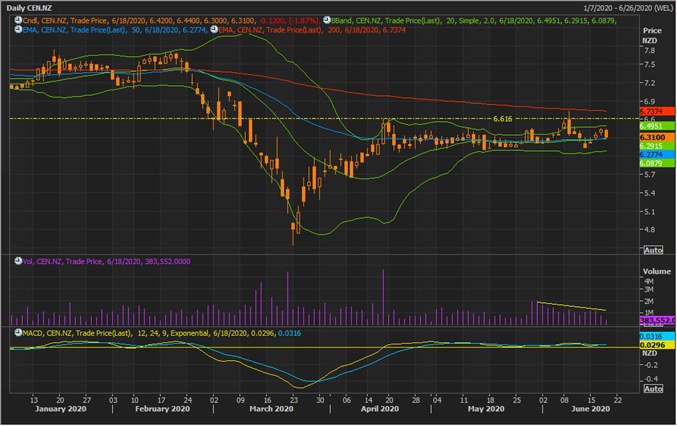 On the daily chart, it could be seen that the stock attempted a resistance breakout during the trading session on 9 June 2020; however, failed and closed below the resistance line of $6.616.

In the recent past, the stock has given a volatility breakout; however, just like the resistance break remained unable to sustain the same with stock closing below the +1 SD of the 20-day simple Bollinger band for few successive trading sessions, while revising the mean.

However, it should be noticed that the post the volatility breakout, the Bollinger band has witnessed a squeeze, and is observing small volumes on declines while 12,24,9 MACD indicator is giving a positive signal, reflecting on the seeding bullish sentiments.

At present, CEN is taking the support of its 50-day EMA, which is currently overlapping with the mean value of the Bollinger band. If the stock sustains above the horizontal resistance and 50-day EMA, it could further seed bullish sentiments while failure to do so could attract bears. 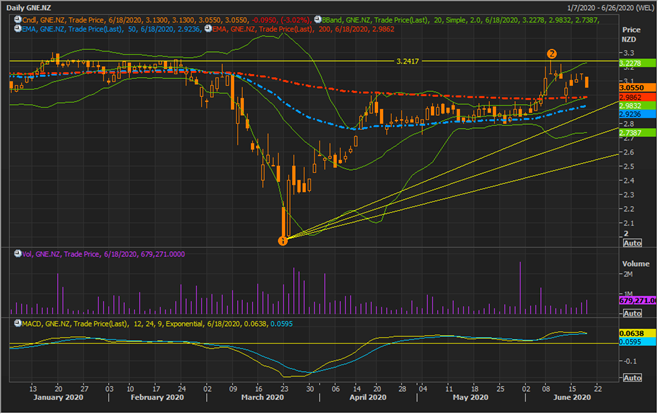 On following the daily chart, it could be seen that the stock has tested the resistance line of $3.24 but failed to breakout and fell. However, if the price manages to close above the same resistance level, the stock could seed bullish sentiment, as it would be confirming a swing up move. The stock is presently trading above the pair of 50- and 200-day EMA, reflecting upon the prevailing bullish sentiment.

Furthermore, the stock has also given a volatility breakout with prices breaching the +1 SD of the 20-day simple Bollinger band. Over the medium-term, the projected Fibonacci fan lines (projected by connecting the recent low to the recent high) should act as support for the stock, and the 1/3 fraction of the Fibonacci fan or the first line from the top should act as decisive support- as it is overlapping with the -1 SD of the Bollinger band.