Which 4 NZX diversified stocks can be considered for this year?

It not only safeguards against losses but also helps in accomplishing long-range financial goals through mitigating risks.

Having said that, let us quickly go through the four diversified stocks from the NZX worth looking at. 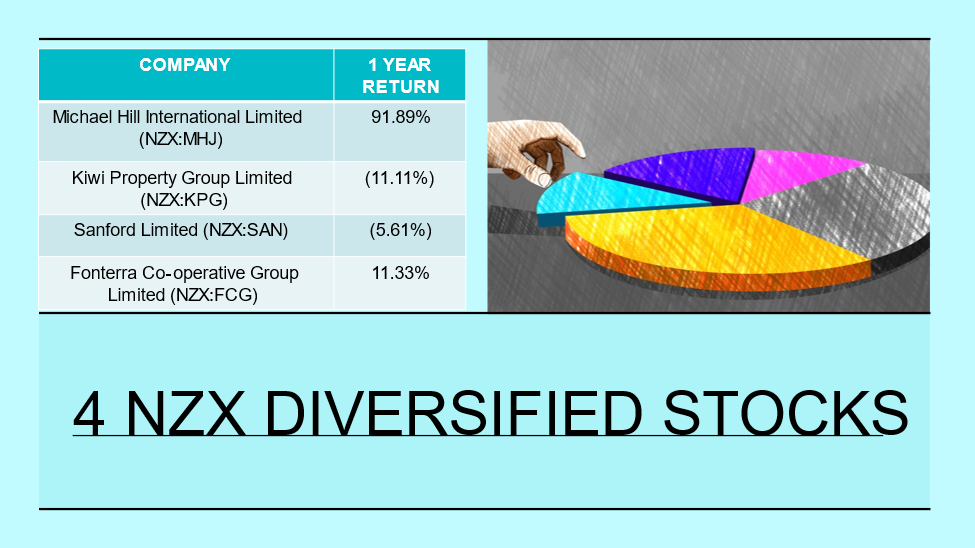 Do Read: Michael Hill (NZX:MHJ): What is its latest business update all about?

Also, despite significant store closures due to the COVID-19 Delta variant across many regions of Australia and New Zealand in October and November, MHJ has posted solid sales growth across all markets, including the digital market for FY22Q2.

Moreover, the Company boasts robust cost controls and prudent capital management and has maintained a healthy cash position at the quarter-end.

On 25 January, at the end of the trading session, Michael Hill International traded flat at NZ$1.420.

Kiwi Property Group Limited has announced a 9.6% growth in the sale of its mixed-use shopping centres in December 2021 when compared to pcp.

Its top-performing asset was Sylvia Park, which recorded a sales growth of 11.7% during the period and its other key shopping centres with robust sales performances include LynnMall and Te Awa The Base.

Also Read: Which are 5 NZX REIT stocks to look at this year?

One of the popular fishing stocks listed on the NZX is Sanford Limited. Recently, the Company had made certain changes in its executive team by making two new interim appointments.

Peter Young and Colin Williams have been appointed for interim roles of Acting Chief Operations Officer and the GM of Fishing, respectively.

New Zealand’s renowned dairy company is Fonterra Co-operative Group Limited. It has lifted its Farmgate Milk Price forecasted range to NZ$8.90-NZ$9.50 per kgMS, underpinned by the sustained demand for dairy products even during the time of constrained milk supply worldwide.

Must Read: Which are 4 NZX consumer stocks to be explored this year?

The diversification of stocks is a smart approach as it not only reduces an investor’s exposure to the risks and volatility associated with a particular industry but at the same time, it helps in accentuating gains derived from investing in varied sectors or companies.