Most active stocks on an exchange are the stocks that trade in the highest volumes on a given day. These stocks see big movements in price and increased volatility that may present trading prospects.

Active stocks are the stocks that witnessed a lot of trading activity through the course of the day.

Here are the 5 stocks that traded the most on the NZX on Friday. 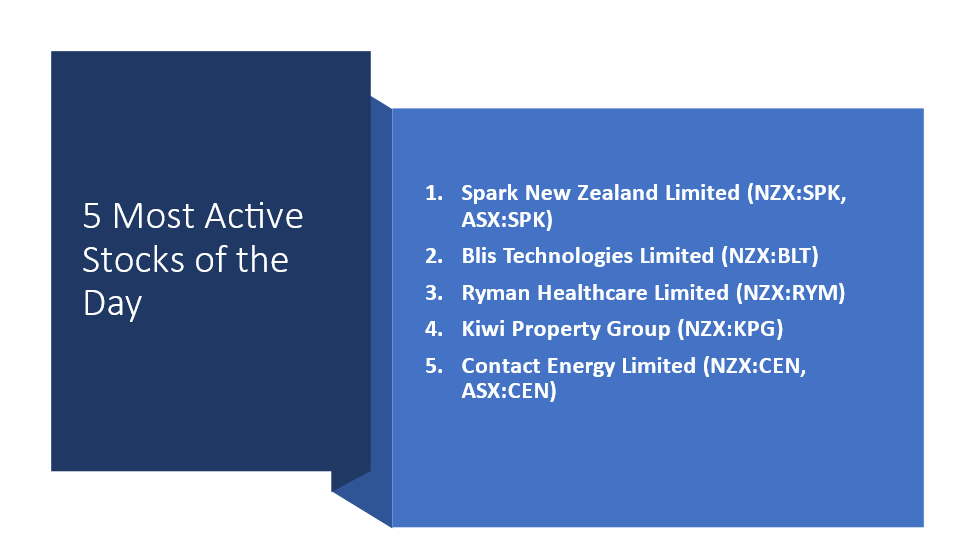 Spark’s subsidiary, Spark Finance announced that it had established 3 sustainably linked loans of $425 million. The Group has also pledged to lower its absolute Scope 1 and 2 GHG emissions by 56% by FY30 under a Science-Based Emissions Reduction Target.

ALSO READ: Which are 5 NZX Dividend stocks to make waves in 2022?

BLT announced on 1 December that its Marketing and e-commerce Director, Laura Grant, has resigned due to personal reasons. She will stay in the role till 31 March 2022.

ALSO READ: Pacific (NZX:PEB): Does the Company have positive growth outlook for 2022?

Ryman posted an increase of 8.5% in its underlying profit of $95.9 million for the half-year ended 30 September 2021. It also posted a 32.5% rise in reported profit to $281.5 million because of investment property revaluations.

The Group also reported an interim dividend of 8.8cps for the period.

GOOD READ: Why these top NZX REIT stocks of 2021 can be considered

KPG announced on 2 December that it had inked a deal with IKEA to offer its 3.2 hectares of land at Sylvia Park. The Group also intends to develop a 6430 square metre retail centre next to the land provisionally sold to IKEA.

Contact Energy was also amongst the most traded stocks, reporting trading volumes of 724,802. CEN ended the trading session at $7.89, up by 0.64% from the previous close.

Contact released a report this month that summarised advantages of a market-based solution and ways to handle decarbonisation of thermal electricity generation at minimum cost.

Investors can make more informed decisions by knowing the most traded stocks of the day.