Weekend wrap: 3 Most traded NZX stocks of the day

Most traded stocks are those stocks that record the highest trading volumes during a specific day. These provide meaningful insights about the market as well as investors' sentiments about a particular stock or security.

Having said that, let us quickly take a look at the three most traded NZX stocks as of today. 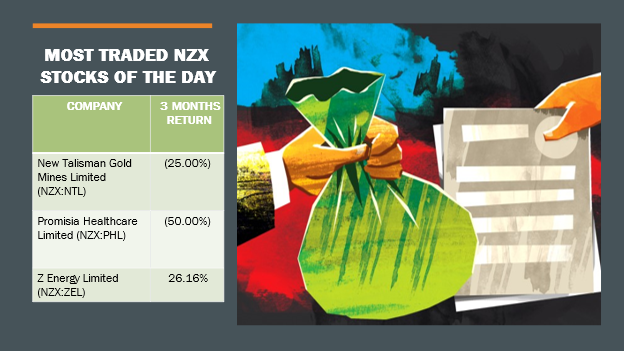 The mining company, New Talisman Gold Mines Limited was one of the highest traded stocks on Friday, with a trading volume of 8,374,854.

Recently, the Company has revealed the departure of its director, Mr Charbel Nader, with immediate effect. The Board will meet on 11 October to deliberate on the election of a new Chair.

Another highly traded stock was Promisia Healthcare Limited, with a trading volume of 5,000,000. The Company has recently witnessed the appointment of its new CEO, Chris Brown.

It is noted that Mr Brown was working on a contract basis since February 2021 to support PHL’s management.

At the end of the trading session, Promisia Healthcare remained unchanged at NZ$0.001, on 8 October.

Interesting Read: How to diversify portfolio with NZX small-cap stocks?

Topping off the list was the country's famous fuel distribution company, Z Energy Limited, with a trading volume of 2,261,300.

In the wake of Ampol’s (an Australian-based company engaged in retail fuel distribution) proposal to acquire ZEL, the latter has announced the extension of its exclusivity period, which originally was for four weeks by another two weeks to address the key issues pertaining to the proposed transaction.

ZEL has assured to keep its shareholders about any developments by 11 October, in this regard.

Investors can always keep a track of the most traded stocks on the NZX Board and can thereafter make informed decisions while trading in them.