As we reach mid-week, let us skim through the latest developments happening across the Kiwi nation. 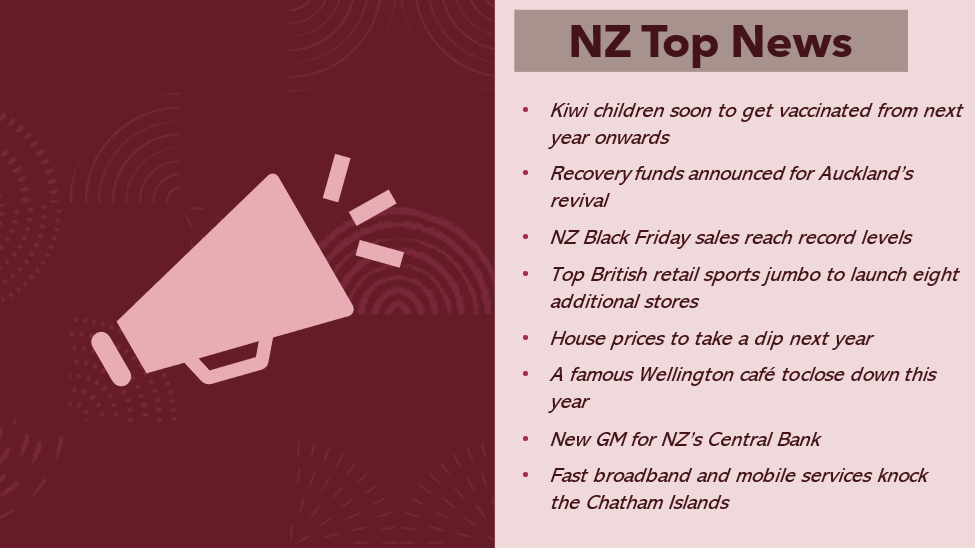 Kids to get vaccinated from early next year

NZ Health Officials have stated that children aged between 5 to 11 years might be able to get a vaccine from January-end next year.

However, approval from MedSafe is awaited, but the nation has secured sufficient doses to start vaccinating children from early next year.

Related Read: How long will COVID-19 pandemic last? Will it continue into 2022?

The NZ government has announced a recovery fund worth NZ$37.5 million for Auckland, aimed to resurrect its economic, social, and cultural activities.

The package would also include 100,000 tickets to Auckland's local attractions and facilities, plus an incentive of NZ$12 million for the city’s foodbanks and community food organisations.

Do Read: Second Round of Applications Open for Sports Recovery Fund Worth NZ$10 million

As per reports, New Zealanders have splurged nearly NZ$250 million on Black Friday, thus taking the sales to record levels in spite of the pandemic.

The purchases were centred around electronics, clothing, footwear, homewares, etc.

JD Sports, the UK-based sportswear retail giant, has revealed that it was planning to open eight more stores across Kiwiland in the coming two years.

This would help in creating nearly 700 jobs for Kiwis.

House prices to take a dip next year

According to ASB's latest forecasts, house owners might witness a drop in house prices in the second half of next year.

Economists opine a fall of around 4% in house prices in 2022.

A famous Wellington café to close down this year

The Lido, Wellington’s famous cafe, is planning to shut its operations after serving Kiwis for more than 30 years, with its last date being 24 December.

It is pointed out that Lido was one of the spearheads in propagating the café culture in Wellington.

John would be responsible for the effective delivery of RBNZ’s digital and security functions.

This would help in strengthening the local economy, businesses and jobs in this far-flung region of New Zealand.