As the weekend comes closer, let us skim through some of the main headlines in the New Zealand market today. 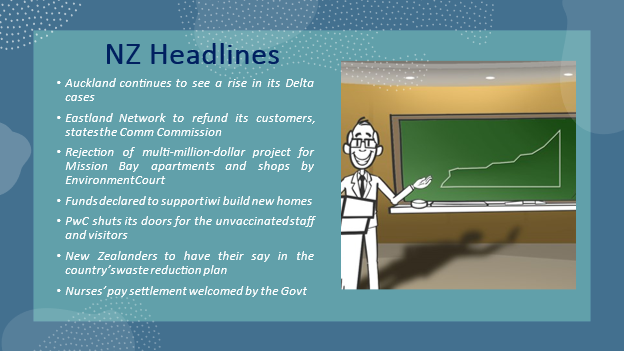 No respite from Delta variant

Interesting Read: Can the world ever get rid of COVID-19?

Commerce Commission has ordered Eastland Network, the Gisborne-based powerlines company, to repay over NZ$300K to its customers.

The refund was ordered because Eastland holds a monopoly in the area and hence it earned more revenue than was allowed.

However, the breach was not intentional, found the Commission.

It is noted that 26K customers in Gisborne, Wairoa, and North Island's East Coast are being served by the Company.

An eight-level NZ$200 million plan for the waterfront Mission Bay retail and apartment scheme has been turned down by the Environment Court.

Had the proposal been accepted, NZ could have witnessed a major change in the seaside suburb venue as well as bulldozing of some prominent buildings like the De Fontein Belgian Beer Café.

The move was taken to help address the housing issues for the Maori community.

Do Read: NZ provides instant help to Maori and iwi groups hit by the pandemic

PwC shuts its doors for the unvaccinated staff and visitors

PwC has declared that those who have not received two doses of the COVID-19 vaccine, will not be allowed to enter its premises from 1 December.

It has now become the second NZ company to take such a decision.

Earlier, this week, Russell McVeagh announced shutting its doors to the unvaccinated staff.

David Parker, NZ’s Environment Minister, has announced inviting proposals from the public for the formulation of new waste legislation pertaining to the new waste strategy.

The said strategy aims to focus on the reduction of waste volumes and methane emissions by 2030.

It is noted that the feedback can be given until 26 November.

The new employment agreement for the nurses working in public hospitals has been settled, announced the NZ Government.

The said agreement makes sure that the nurses get a pay rise as they have been underpaid for a long.

The country’s Attorney General has announced the appointment of Judge Layne Harvey as a Judge of the High Court.

It is noted that Justice Harvey would be based in Auckland.

NSW opens its borders for double-jabbed people from 1 November

As per the latest reports, from 1 November onwards, the need for quarantine will no longer be required for doubly vaccinated people entering New South Wales, the Australian state.

Travellers are only required to undergo a COVID-19 test before taking a flight and need to display the proof of full vaccination.