Let us quickly take a glance at the top headlines making rounds in New Zealand and which are also of key importance for the market. 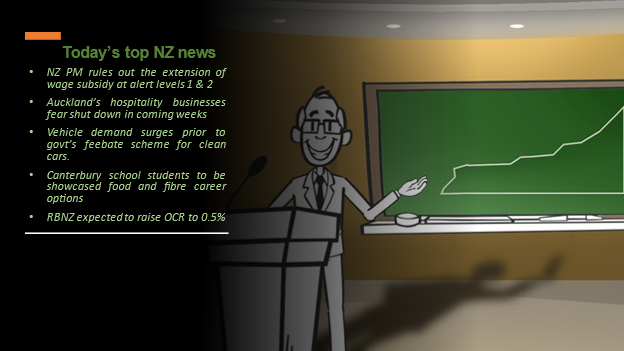 Lately, 12 more COVID-19 cases have been identified, and all of them are under home quarantine or in a MIQ. Auckland continues to remain at alert level 3, while the rest of the country is at alert level 2.

Related News: How is New Zealand gearing up for vaccine passports by December this year?

Jacinda Ardern, NZ PM, stated that the Government was planning to gradually reopen the country when 90% of the entire eligible population had been vaccinated against the pathogen.

Ruling out extension of wage subsidy

The PM has ruled out the extension of the COVID-19 wage subsidy scheme for stumbling businesses when the Auckland alert level drops.

The PM has refused to extend the wage subsidy at alert levels 1 and 2.

Jamie Freeman, Hospitality NZ’s Auckland president, has warned that hundreds of businesses may shut down over the coming weeks as the industry has been hit hard by the ongoing lockdown.

According to him, the hospitality sector has suffered NZ$368 million from 18 August to 3 September.

He has urged the Government to consider extending the resurgence payments and wage subsidy to help the sector keep afloat.

To beat the fee on polluting vehicles, demand for vehicles has surged in the country.

It is noted that as a part of the government's feebate scheme for clean cars, vehicles will cost more from April 2022 onwards.

Food and fibre careers to be showcased to Canterbury school students

The Government has launched an initiative today, wherein Canterbury's Secondary school students will have the breadth of numerous food and fibre careers displayed to them.

Working on-farm, providing professional services, carrying out significant research and innovation, are among various career options to be showcased to them.

It is noted that Canterbury is NZ’s leading food and fibre producing hub and the future generation would play an integral part in the region’s success.

Evergrande debacle may not cause global financial unrest

Chinese property jumbo, Evergrande, has missed the key deadline of Friday to repay a bond interest payment worth US$83 million.

Must Read: Evergrande: A US$300-billion-time bomb set to explode

However, as per reports, the real estate Company only makes up to 1% of the Chinese bank loans. Even if all of this defaults, it would be difficult to see widespread failures, though banks' profitability would be hit hard.

Considering that Chinese regulatory authorities boast significant powers and have taken strict actions against tech and educational companies, earlier, they would certainly protect the interests of the regular investors at the expense of the wealthy business class.

A section of economists is of the opinion that the RBNZ next week may lift OCR, i.e., Official Cash Rate from the existing 0.25% up to 0.5%.

Related Read: Top 8 things to watch out for in NZ market today

The above expectation is making rounds, as last week, Christian Hawkesby, RBNZ’s Assistant Governor, stated that during the times of uncertainty and when risks are evenly balanced, then central banks across the globe generally follow a smooth path, moving 25 basis point increment or maintain an unchanged policy rate.