Let us walk through five major developments from Kiwiland as we get to the middle of the week. 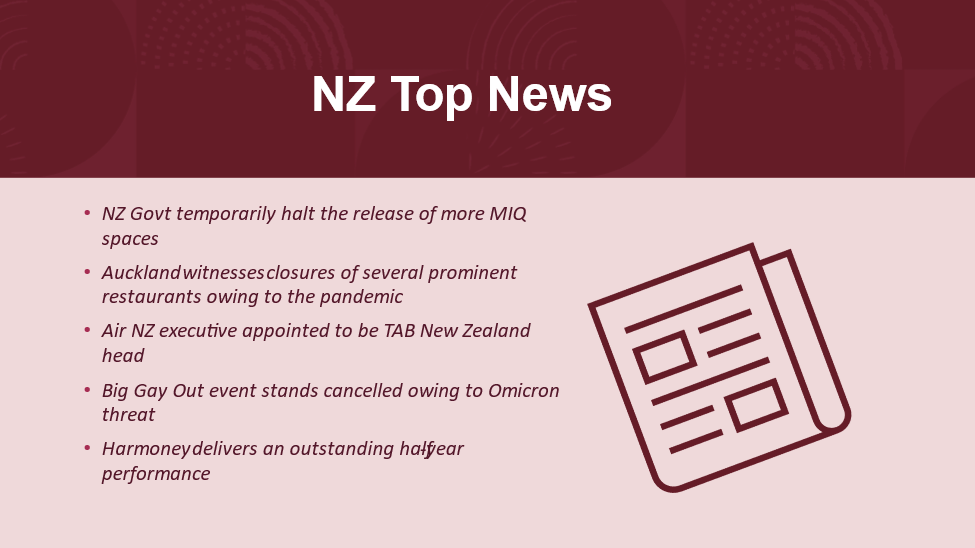 New Zealand health authorities have announced a temporary pause in the country’s MIQ facilities, owing to the extreme pressure being faced by these facilities due to unprecedented Omicron risk.

No specific date has been stated as to when these spaces would be available again.

Auckland witness closures of several restaurants owing to the pandemic

Auckland’s hospitality industry continues to be hugely impacted by COVID-19, as more and more restaurants are going for closure.

Elijah Blue, Misters Real Food, Euro and Saxon + Parole are some of the prominent restaurants and cafes which have succumbed to pressures of the pandemic.

Do Read: One Hospitality Company With Decent Growth Prospects

Mike will take charge of his new position in March this year.

It is noted that TAB oversees betting services across New Zealand, including horse racing and greyhound racing.

Big Gay Out, one of the largest events during Auckland's pride month, has been called off, keeping in mind the health and safety of its people.

Must Read: Northern Bass cancelled due to COVID-19 threat, plus other major NZ updates

Harmoney Limited (NZX:HMY) today unveiled its 1H FY22 performance, highlighting the growth of the Group’s loan book by 19% to NZ$557 million, underpinned by a significant rise in customers and increased operational leverage due to high levels of automation, thus resulting in increased profitability for HMY.

Also Read: These top 3 NZX financial stocks can be explored in 2022

Moreover, it has provided its FY22 market guidance, wherein it has forecasted a minimum 20% growth on FY21 for its group pro-forma loan book, amounting to be at least NZ$600 million and a group revenue to be more than NZ$92 million.