Let us take a quick gaze at some of the newest developments happening across the Kiwi nation. 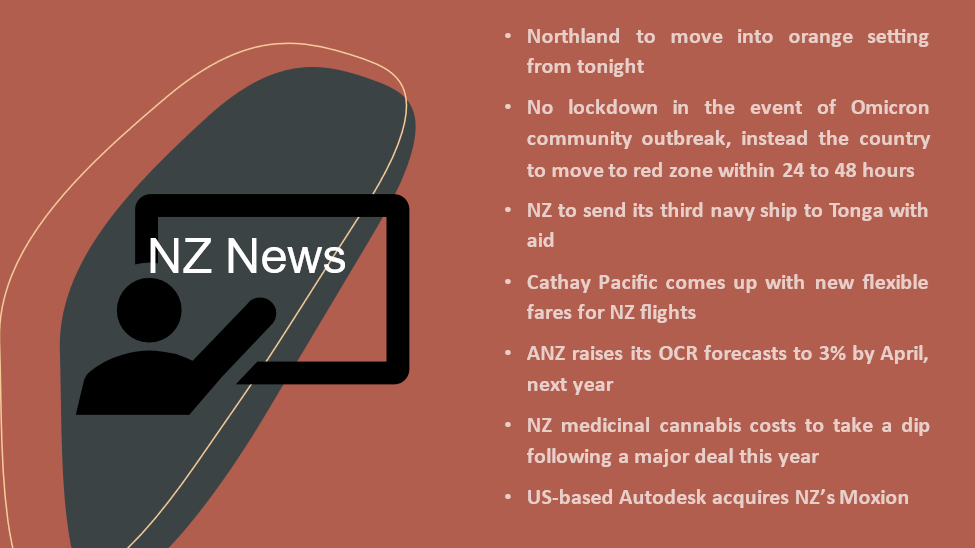 No lockdown in the event of Omicron community outbreak

The NZ Government has announced the transition of Northland to orange setting from tonight, while the rest of the nation will continue to remain at orange.

In case there is an Omicron community outbreak, the whole of the country would move to the red zone within 24 to 48 hours instead of imposing lockdowns.

NZ to send its third navy ship to Tonga with aid

Following the weekend eruption of the volcano in Tongan islands, New Zealand will be sending a third navy ship to aid relief efforts of the devastated country.

Must Read: How is Tonga coping with the underwater volcano?

Moreover, the airline will offer various luggage allowances and flexibility levels to the flyers travelling in the economy class.

ANZ raises its OCR forecasts for next year

Further, it signalled that the RBNZ too would be prompted to raise the OCR further when the latest figures pertaining to the December quarter on inflation and unemployment would be released in the coming weeks.

Costs of medicinal cannabis in the country are likely to decline this year following a significant deal between Auckland-based Helius Therapeutics and Puro from South Island.

Interesting Read: Medicinal cannabis industry in NZ is set to boom despite hurdles

The said deal would be the first commercial bulk deal in Kiwiland and would see more affordable prescription products being available in the country.

Autodesk, the US-based giant, focusing on Postproduction software development, has announced its acquisition of Auckland start-up, Moxion, a cloud-based company specialising in the Media and Entertainment industry.

The deal is said to be worth tens of millions of dollars and will help in expanding Autodesk's cloud platform for media and entertainment upstream.