Though a tiny Pacific nation, New Zealand boasts a highly developed economy. It is home to some of the largest and globally renowned companies in the world, which come from diverse fields like healthcare, infrastructure, telecom, supply chain, agriculture, etc. 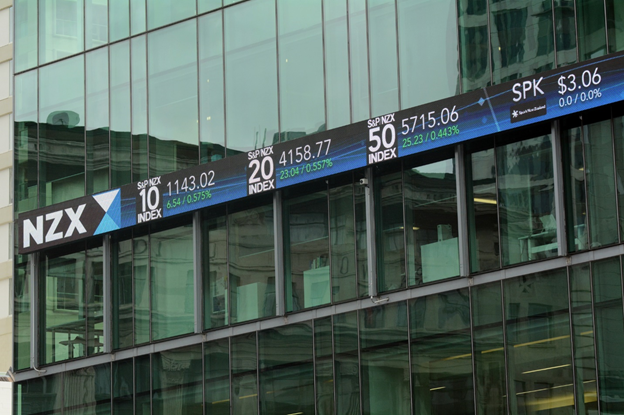 Let us quickly go through the top 10 NZX-listed companies and their latest updates.

Fisher & Paykel Healthcare Corporation Limited is the world leader in manufacturing and distributing medical products related to respiratory and acute care for critically ill patients. Boasting a market capitalisation of more than NZ$18 billion, FPH’s products are sold in over 120 countries.

FPH is going to hold its Annual Shareholders’ Meeting on 18 August, details of which would be sent to the shareholders shortly.

Must Read: What are the trading volumes of 7 NZX 50 stocks?

Second on the list is Meridian Energy Limited, which is New Zealand’s largest generator of electricity. Having a market capitalisation of over NZ$13 billion, the NZ Government owns a 51% stake in the Company.

It is focused on building a sustainable tomorrow as all the electricity generated by it is clean and renewable.

MEL has recently announced offering financial assistance to its NZ-based permanent employees in association with its Employee Share Scheme. Also, next month, the Company plans to appoint distinguished Maori leader Tania Simpson as an independent director on its Board.

Read: What is the trading volume of 4 NZX stocks amid market session?

Coming up next is Auckland International Airport Limited, which is one of the largest NZX-listed companies, having a market capitalisation of more than NZ$10 billion. The Company has recently provided a traffic update for the months of May and June 2021, wherein the total passenger volumes grew by 747.1% and 196.9%, respectively.

Moreover, AIA saw an increase in its international passengers owing to the opening of the quarantine-free trans-Tasman travel arrangements.

Do Read: Why to consider investing in industrial stocks?

We would now be looking at Wellington-based Spark New Zealand Limited, which is Aotearoa's biggest telecommunications and digital services company and has a market capitalisation of almost NZ$9 billion.

SPK's Future Director Ana Wight's term has been extended by five months. Her appointment, which was supposed to end in July 2021, will now end in December 2021.

Also Read: Which are the top four telecom companies in New Zealand?

Next on the list is Mainfreight Limited, which is NZ’s famous supply chain logistics company, having a market capitalisation of more than NZ$7 billion. Operating for almost 43 years, the Company has a presence in 26 countries.

In its recently released newsletter, MFT thanked its team for delivering an exceptional performance despite challenging circumstances. Its PBT clocked at NZ$262.4 million along with 14.5% growth in revenue, amounting to NZ$3.54 billion for FY21.

Moreover, the Company is focused on providing enhanced efficiency, capability, as well as improved sustainability in the coming future.

Another prominent healthcare company operating in NZ is Ryman Healthcare Limited. Boasting a market capitalisation of NZ$6.5 billion, RYM has been providing retirement living across NZ for over 35 years.

The Company has announced its hybrid 2021 Annual Meeting to be scheduled for 27 July, wherein its shareholders have a choice to attend the meeting virtually or in-person.

Also, the Company intends to pass resolutions relating to the re-election of directors as well as deciding upon the auditor's remuneration.

Must Read: Why are 10 NZX dividend stocks popular among investors?

Now, we would talk about Contact Energy Limited, which is another well-known company listed on the NZX and has a market capitalisation of more than NZ$6 billion. Apart from being a leading electricity generator in the country, CEN also offers broadband services to Kiwis.

Read: Why are 5 NZX50-listed shares trending during the market session?

Auckland-based Fletcher Building Limited is a well-known name in the construction and infrastructural space. Operating since 1909 in the country, FBU is one of the largest companies which is listed on the NZX, with a market capitalisation of almost NZ$6 billion. It will release its FY21 financial results on 18 August.

On 22 July, at the time of writing, Fletcher Building was unchanged at NZ$7.27.

Read: Why are these 5 New Zealand Exchange stocks in the limelight?

Fonterra Co-operative Group Limited is a world-renowned dairy company, which sells its products in more than 140 countries. Operating 30 manufacturing sites across the country, Fonterra exports nearly 95% of its total milk production.

In its latest communication with its shareholders, the Company is planning for farmers’ vote on its capital review process in the Annual Meeting, which is going to be held in December 2021.

Moreover, FCG is likely to publish its FY21 financial results in September 2021.

The a2 Milk Company Limited (NZX:ATM;ASX:A2M)

Another prominent dairy company that has a market capitalisation of about NZ$5.5 billion is The a2 Milk Company Limited, which has business operations spread across NZ, Australia, China, the US, Canada, and other emerging markets.