Could these 4 attractive NZX 50 stocks make you rich?

Ever since the outbreak of the pandemic, stock markets across the world have seen volatility. Right from hitting the rock bottom in March 2020 to surging up by more than 80% in 2021, the markets have seen all.

What kind of stocks could be considered for a portfolio?

In a diversified portfolio, different kinds of stocks from a range of sectors can minimise the risk of losses associated with the market volatility. 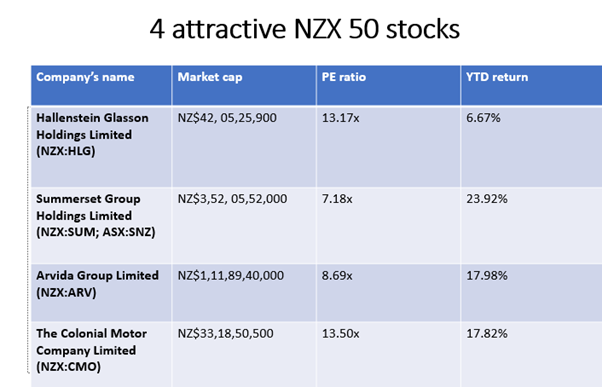 In its last update, the Company provided annual results for the period ended 1 August. Hallenstein Glasson’s NPAT stood at NZ$33.32 million, rising by 20% on pcp.

Due to Auckland being under alert level and NSW and Victoria being under lockdown, in September, Directors of the Company decided to postpone a final dividend declaration until the cities were out of it.

It paid an interim dividend of NZ$23 cps on 16 April 2021 and has been consistently paying dividend amount for last 3 years.

Summerset Group released 6-month results for the period ended June 2021. During the period, underlying profit was noted at NZ$75.5 million, rising by 68%.

Also read; Why is the Summerset (ASX:SNZ) share price up today?

Another retirement village operator, Arvida Group Limited, declared its annual results for the period ended March 2021 in May this year.

On 8 October, Arvida ended the trading session flat at NZ$2.13.

Owner of automobile dealerships across New Zealand, The Colonial Motor Company Limited, is domiciled in Wellington.

The Company declared full-year results ended June 2021 in mid-August. Trading profit after tax was noted at NZ$29.9 million, jumping by 61% on pcp.

Volatility is often associated with stock markets, which is caused by various factors. Placing one’s hard-earned money into these stocks seems to be a risky affair. A prudent and well-researched approach can be followed while dealing with the trading of shares.