S&P/NZX All Consumer Staples witnessed a rise of 1.84% while S&P/NZX All Materials ended in red as there was a decline of 1.53%. We will now have a look at the performance of individual stocks.

The following image provides a broad overview as to how the share price of FWL has trended in the span of past one year: 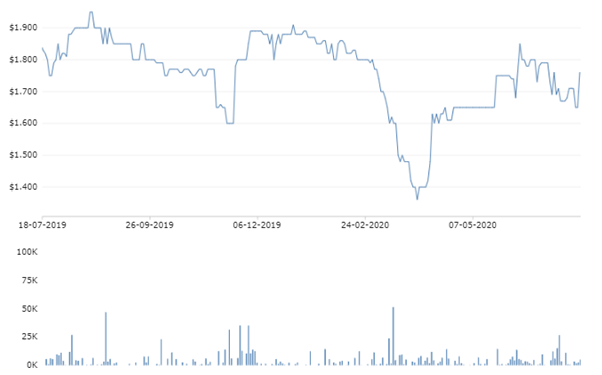 NZO Ended the Session in Green

New Zealand Oil & Gas Ltd (NZX: NZO) recently stated that it has been advised by Operator BP, that the Ironbark Exploration Drilling Environment Plan has been approved. As per the release, the Joint Venture has been working towards commencing drilling in the month of October 2020.

It was mentioned that Exploration permit WA-359-P is located in Carnarvon Basin, offshore Western Australia, ~50 km from existing North West Shelf LNG infrastructure. The Ironbark-1 well is expected to drill to approximately 5500 metres and would be the first test of Ironbark gas prospect.

ikeGPS Group Limited (NZX: IKE) made an announcement that one of the largest communications infrastructure companies in the US has standardized on the company’s platform for all pole-related 5G as well as fiber deployment processes.

The company stated that anticipated revenue impact has not been defined yet. However, there are expectations that this would be having a positive impact on the company’s financial performance FY21 and beyond, and on the broader position in North American market.

The website has been prepared for informational purposes only and is not intended to be used as a complete source of information on any particular company. The above article is NOT a solicitation or recommendation to buy, sell or hold the stock of the company (or companies) under discussion. Kalkine does not in any way endorse or recommend individuals, products or services that may be discussed on this site.
Tags:
S&P/NZX50