Politics: How can Todd Muller's Resignation Change the Market Game

New Zealand's opposition leader Todd Muller has resigned on Wednesday. The news has come as a surprise to the entire nation as the national elections are less than two months away. Muller cited health reasons to quit this crucial role. He said that he is not suitable for the responsibility and it has taken a toll on his health. This has become “untenable from a health perspective”, Muller mentioned.

This news came on National caucus via a teleconference. Muller did not attend the announcement, nor he has given any press briefing regarding the same.

Prime Minister Jacinda Ardern spoke to the media. She agreed that politics is indeed a tough space, while she expressed her sympathies for Todd Muller and his family. 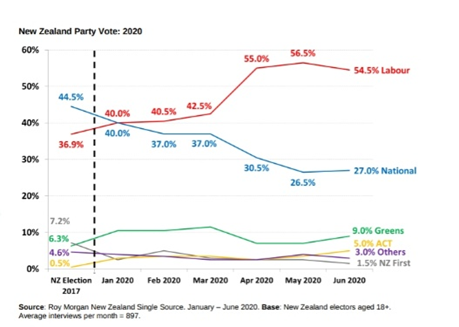 Support for Prime Minister Jacinda Ardern’s Labour Party was 2% down in June at 54.5%.  It is still more than double support for National at 27%. The elections are due in mid-September. If looking at the current scenario for the Labour Party, they could govern without the support of greens or New Zealand First.

In the month of January, Nationals were at par with Labour party at 40%. But due to the low response in the voting result in May, former leader Simon Bridges was replaced with Todd Muller. The results in June shows the insignificant impact of the leadership change.

Before resigning, Todd Muller had taken a crucial task to topple the current Government. The current Prime Minister has become immensely popular after swiftly dealing with coronavirus pandemic.

Muller and his party had plans for a series of policies that resonate for New Zealand. These policies were to boost the economy, especially providing adequate financial support in the times of pandemic. Muller was also successful in convincing a member of the New Zealand Parliament Amy Adams to hold her position amidst retirement plans. Adams was in charge of reviewing the party’s policies before the election and COVID-19 recovery division.

Muller had criticised the current Government for being “disconnected and sporadic”. The response from the Government for COVID-19 recovery was cluttered as he expected more strategic coherent response.

Coming from a corporate background, Muller believed in himself in handling this crisis. In one of the reports, while working in the leadership position for a $22 billion dairy giant Fonterra, he recalls having a scare related infants’ formula and how he dealt with it.

Muller also has a political background. He has worked for several years in the 1990s as a staffer with Prime Minister Jim Bolger. While working with Climate Change Minister James Shaw, he secured bipartisan support for the Zero Carbon Bill and believed that New Zealand’s economy must evolve to lower emissions. Introducing Emissions–reducing technology to help sectors like agriculture, was in Muller’s immediate agenda.

Muller’s work on the best mix of Economic and social policies for the communities that were most impacted by COVID-19 is now a question mark. He believed communities like M?ori and Pasifika are having the impact of the pandemic in an economic context.

Proposed Plans To Get Economy Back On Its Track

Todd Muller recently unveiled his economic plans as favourable financial management, low debt and infrastructure. He spoke about lowering net core Crown debt with a target of 20% of GDP. The treasury believes that net debt is going to rise to 53% of GDP in 2024, with a distant estimation of 42% by 2034.

Though Muller admitted that getting the debt down is a huge task, he believed that the policies he is introducing would work towards a better future. Bringing fiscal surplus back and paying debt down to 20% of GDP is necessary; otherwise, inevitably New Zealand will face natural, economic and health disaster in the near future.

Fiscal Responsibility Act which was launched by Helen Clark Labour Government is something Muller supported throughout. This legislature is keeping the debt low in New Zealand since the 1990s.

Infrastructure: Muller, by this month-end, planned to launch “the biggest infrastructure package in this country’s history” which included roads, rail, public transport, hospitals, school and water.

Skilled Manpower: With all the countries around the world, working towards better technology, Muller planned to prepare NZ workers, enabling them with the required skills.

Green Energy: With Zero Carbon Framework in place, Nationals have pledged to deal with agricultural emissions in the country.

Building Communities: Muller committed to improving community standard by providing them with community institutions and “maintain and enhance their social capital.” Muller believed the communities are damaged from the 80s, have not been repaid and need special attention.

Muller and National Party’s policies and strong opposition have been keeping the current Government on its toes. Now that Muller is no longer contesting for the leadership in New Zealand, Nikki Kaye is serving the role of acting leader of National Party. Time will tell whether Nikki can fill these gaps and successfully draft party’s policies. As of now, according to the recent poll, it seems that voters are focusing parties which have provided stability and growth during present challenging times.