NZME Limited (NZX: NZM) happens to be an integrated media company in New Zealand. The company was demergered from its parent, APN News & Media in the month of June 2016. From June 27, 2016, the company has been listed on NZX under the code “NZM.”

Many of the media houses have flourished as their addressable market is larger, or they have scaled up their operations to stay competitive.

Coronavirus is having a significant influence on media consumption, supply, and advertising all around the world. Advertising expenditure has come under substantial pressure. Some of the sectors are stopping the advertising and few campaigns are now being considered improper because of social distancing.

Potential Impacts on Entertainment and Media

There is a significant rise in demand for content, but there are also hurdles in production and advertising revenue. Movie theatres, concert venues, theme park and museums are all closed, and sporting events have been cancelled, which could impact the revenue. Many musicians are moving online and are dependent on streaming platforms as live shows are stopped.

The company has implemented several programs to reduce costs and capital expenditure throughout the business. All operating expenses have been evaluated with a stance to reducing overall costs and cash outflows.

Some of the measures include the following:

As the country is in Alert Level 4 lockdown, the company is expecting April 2020 advertising revenues to be around 50% lower as compared to April 2019. The company’s revenue is expected to be significantly down on the corresponding period in 2019. The cost saving initiatives would partially offset the anticipated revenue declines.

For the full year ended 31st December 2019, the company reported operating revenue of $371.7 million (excluding impact of NZ IFRS 16 and exceptional items), down by 4% and operating EBITDA of $50.6 million, down by 7% against FY18.

The company added that challenging advertising market affected print and digital advertising, together with declines in the print circulation revenue. In the year ended 2019, the company posted statutory net loss after tax amounting to $165.2 million, while in 2018, the company posted net profit after tax of $11.6 million. As per the release, in the year ended 2019, the cost savings along with increased efficiencies delivered reduction in the operating expenses of 4% when compared to pcp (or previous corresponding period). 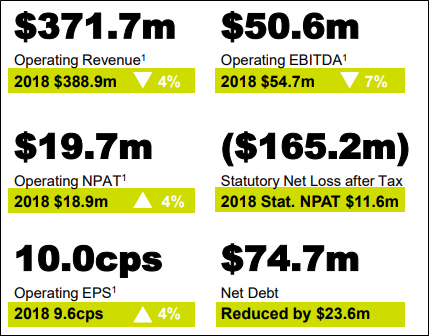 Segmental Performance of the Company

The company’s print revenue segment reported total revenue of $192.4 million, down by 9%. Print advertising revenue stood at $102.2 million, down by 10%. But it was better than the market which declined by 13.7%.