The S&P/NZX50 Index has been built to measure the performance of 50 largest, eligible stocks which are listed on Main Board of the NZX by float-adjusted market capitalization. The following image provides an overview as to how S&P/NZX50 index has performed in the span of one year: 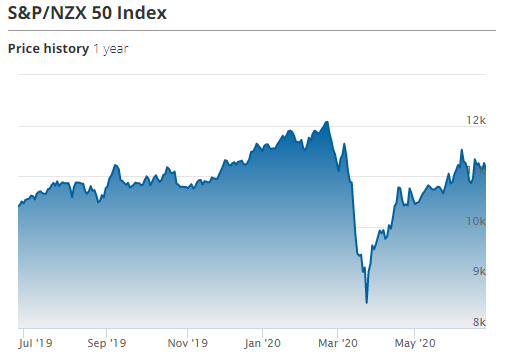 In this article, we will have a look at the latest changes that have happened.

The stock SkyCity Entertainment Group Limited (NZX: SKC) was removed from S&P/NZX 10 Index and the stock of Infratil Limited (NZX: IFT) has been added. These changes became effective at the open on June 22, 2020.

SKC is New Zealand’s leading leisure, tourism and entertainment company with iconic status and it is listed on New Zealand (NZX) and Australian (ASX) stock exchanges. Recently, SKC successfully finished the $180 million institutional placement as part of $230 Mn equity raising which was announced on June 17, 2020.

Infratil Limited has successfully finished the fully underwritten institutional placement which was notified on June 9, 2020.

The stock of Air New Zealand Limited (NZX: AIR) was removed from S&P/NZX 20 Index and Summerset Group Holdings Limited (NZX: SUM) was added. These changes became effective at the open on June 22, 2020.

On 9th March 2020, the company suspended its earnings guidance for FY20 because of the substantial uncertainty surrounding the duration, scale, and impact of the coronavirus pandemic. The New Zealand Government’s move to Alert Level 1 has permitted the company to slowly restart the domestic network. However, earnings and revenue are significantly lesser than anticipated prior to the coronavirus outbreak. The company is anticipating registering an underlying loss before other significant items and taxation of up to $120 million for FY20.

Summerset Group Holdings Limited is one of the leading operators and developers of retirement villages in New Zealand, with 31 villages completed or in development across the country. The market capitalisation of the company stood at around $1.43 billion and the stock ended the session at NZ$6.300 per share on June 26, 2020, reflecting a decline of 0.79% on an intraday basis.

The stock of Gentrack Group Limited (NZX: GTK) was removed from S&P/NZX 50 & S&P/NZX 50 Portfolio Index and Napier Port Holdings Limited (NZX: NPH) was added. These changes became effective at the open on June 22, 2020.

Gentrack Group Limited has recently appointed Ros Bartlett as Interim Chief Financial Officer. She is the company’s current UK Finance Director based in London and would be taking up the position of Interim CFO while continuing to oversee financial operations of the UK business.

For the half-year ended 31st March 2020, the company reported total revenue of $52.3 million, up by 7.5% as compared to the same period last year led by growth in cruise revenue, increase in container volume and increases in tariff. The container volume increased by 7.5% to 135,000 TEU. The bulk cargo volumes were down by 7.3%.

Even though the cruise season came to an unexpected and early end, cruise services revenue increased by 22.5% to $4.2 million from $3.4 million. This showed an increase in ship visits from sixty-six ships to seventy-six ships, although short of the 87 ships the company had booked. The company’s Board has resolved to not pay an interim dividend.

The website has been prepared for informational purposes only and is not intended to be used as a complete source of information on any particular company. The above article is NOT a solicitation or recommendation to buy, sell or hold the stock of the company (or companies) under discussion. Kalkine does not in any way endorse or recommend individuals, products or services that may be discussed on this site.
Tags:
NZX: SKC