The year 2020 has been very volatile for the investors because of many reasons like the US-China trade war, Australian bushfire, but the main disruptor to the market is the COVID-19 pandemic. According to the latest data published by Stats NZ, the economy of New Zealand declined by 1.6 per cent in the quarter of March 2020. Notably, the goods-producing industries fell by 2.7%.

However, there are some stocks which are fundamentally strong and the importance of these stocks are highlighted during tough times.

Let us have a look at five such stocks.

In the time period of three months, the stock of MFT has given a total return of ~26.67%. MFT is a global logistics provider that offers managed warehousing and domestic and international freight forwarding.

The company’s New Zealand businesses continued to expand the network, giving it a stronger regional presence across all three products. Australian segment witnessed a strong recovery during its second half led by pleasing progress from Warehousing and Transport divisions. The key numbers have been mentioned in the below image: 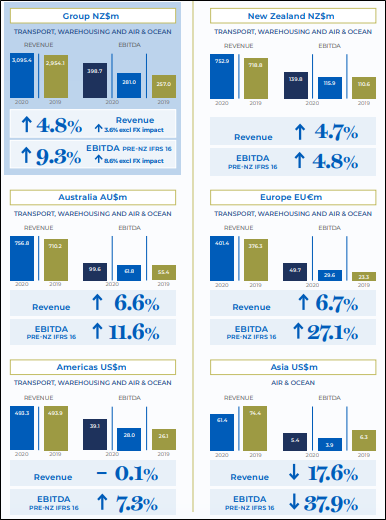 In the time period of nine months, the stock of FPH has given a total return of 83.98 per cent. FPH is a primary marketer, manufacturer and designer of systems and products for usage in surgery, acute care, respiratory care, and the treatment of obstructive sleep apnea.

In the first half of 2020, the company delivered a good set of numbers. The company witnessed strong demand throughout its Hospital product portfolio, but mainly for AirvoTM and OptiflowTM systems, which persisted to gain from the growing body of clinical research in the usage of nasal high flow therapy. Net profit after tax was up 24 per cent at $121.2 million and operating revenue was up 12 per cent at $570.9 million.

The company has decided to release its full year results on 29 June 2020, instead of 28 May 2020, as was previously declared.

The company is a leading distributor and marketer of recognised consumer products and animal care brands.

The company’s wholesale, distribution and retail Healthcare businesses were essential services and were critical in ensuring a continued and stable supply of healthcare, medical and pharmaceutical products to the community. Its Healthcare segment remained open and operational. The Healthcare segment experienced unprecedented levels of demand in the third quarter ended 31 March 2020.

In the time period of nine months, the stock of ATM has given a total return of 49.31 per cent. In the release dated April 22, 2020, the company stated that, because of the COVID-19 situation, the outlook with respect to revenue as well as earnings is unclear.