The Australian Competition and Consumer Commission (ACCC) published its final report, on 4 November 2020, highlighting that it had concluded the public inquiries into NBN entry-level pricing and NBN wholesale service standards and set out the findings from the investigation.

The agency has given a thumbs up to NBN’s next Wholesale Broadband Agreement (WBA4) as the builder agrees to several measures that are in the long-term interest of the end-users (LTIE) in Australia.

Let us delve deep and discuss in detail-

The final report by the ACCC, related to NBN inquiries, includes findings regarding the changes to NBN access arrangements that will promote the long-term interests of broadband consumers, and balance the competing business interests of NBN Co and NBN access seekers. The arrangements are now included in NBN’s wholesale broadband agreement (WBA4).

Reduction in NBN’s broadband price and extension of rebates

NBN Co has agreed to cut down entry-level prices and also increase the consumer rebates under pressure by Australia's consumer regulator to revamp the Company’s wholesale agreement.

The changes in pricing should permit the supply of unlimited broadband plans on the NBN of quality and price comparable to those that were offered to customers on legacy networks.  This will protect the customers from a forced price rise as they are required to switch to the NBN.

The ACCC considers that the below depicted NBN access arrangements should be made available to access seekers for promoting the LTIE, and balance the competing business interests of NBN Co as the access provider with those of its access seekers- 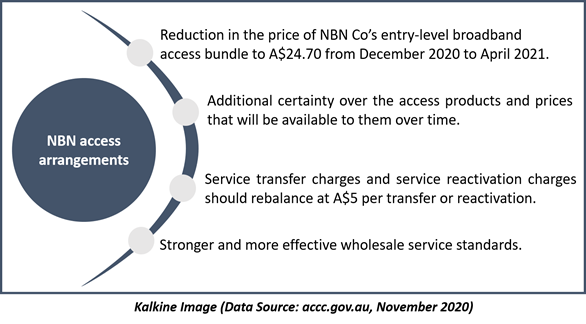 The National Broadband Network (NBN) is built and managed by NBN Co with the mandate to make sure that all Australians have access to high-speed broadband at the wholesale level. The wholesale terms of access are of fundamental value to competition in dependent markets. The terms have a robust bearing on the price, service standards as well as the degree of reliability faced by end-users.

DO READ: As NBN Spread its Tentacles Further, how would it Impact ASX200 Telecom Stocks?

The agency also requested feedback on this package of access arrangements, which NBN Co had committed to incorporating into the next version of its wholesale broadband agreement (WBA4).

NBN Co, since then, has been advancing WBA4 development to the point where it has now offered these improved pricing and service standard commitments in contractual form until the year 2022 end.

Considering the development, the agency decided not to issue an access determination; instead, it will observe the implementation of the new access arrangements under WBA4.

For service transfer and reactivation charges, NBN Co had decreased its service transfer cost to A$5.00 from A$22.50 in response to substantial concerns that access seekers had expressed earlier in the inquiry to the ACCC.

The ACCC also included stronger and more effective wholesale service standards to be made in the NBN access arrangements.

The stronger and more effective wholesale service standards according to the ACCC include the rebates extension to business-grade services suggests that small-medium business customers will be eligible to take benefits of rebates in cases of poor service. Besides, a series of improvements to operational procedures and reporting arrangements, including some other standards.

The image below highlights wholesale service standards provided by the ACCC: 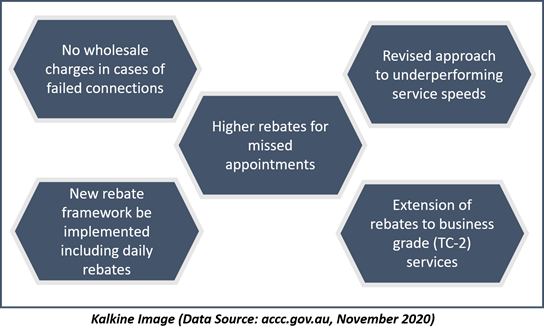 These access arrangements signify a significant step-change that were in effect on the commencement of the inquiries. 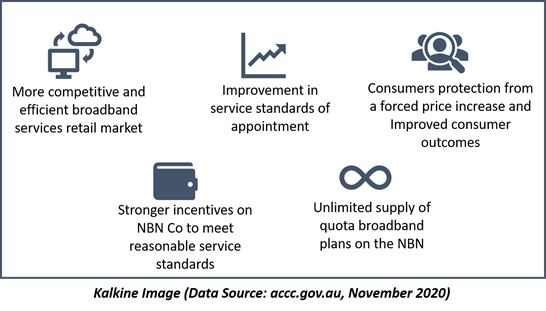 It is noteworthy to mention that, for long-term pricing arrangements, the revised access provisions do not offer any direct prohibition on NBN Co efficiently returning to a heavy reliance on short term discounts.

The image below shows the price-related access arrangements representing an additional price reduction in December 2020. The price reduction is A$1.90/month below the modified entry-level bundle (mELB) price and a further cut of A$2.20/month in May 2021. 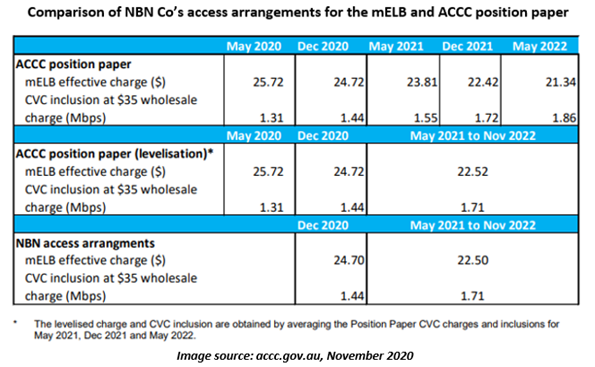 NBN Co will execute the new agreement on 1 December 2020, with the amendments due to happen via NBN access seekers providers that offer services of NBN directly to consumers.