Last month, on 13 August, Telstra highlighted about its operational performance in the FY20 results for the period ended June 2020. During the period there was a robust growth in the customer base and Telstra strengthened its market position in the competitive telecom sector of Australia.

As per the latest update the 2 entities TLS, and MSFT, are taking forward their association in fields like IoT (Internet of Things), Edge, artificial intelligence (AI) and digital twin capability. 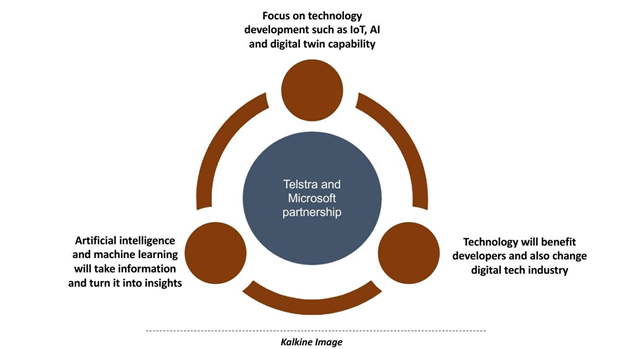 Telstra and Microsoft plan to develop a digital twin across Telstra’s commercial buildings. Initially, Telstra will deploy the technology in their five buildings. Once fully set up, this will be recognised as one of the most comprehensive Azure-based digital twins in Australian region.

The technology would let the Australian company TLS to set up a “digital nerve centre”. The technology is going to bring the clarity in business process. It will also upgrade the atmosphere at the workplace. Apart from this, the digital twin will enhance digital interaction between staffs. Further, Telstra will be enabled to improve operational efficiency because of the digital twin.

The developers and independent software vendors (ISVs) in Australia work on developing solutions that leverage AI, low latency, and improved resilience. The digital twin technology by Microsoft Azure and Telstra's network will extend its support to the current developments in the field.

Telstra’s CEO Andrew Penn said that the revelation with Microsoft would streamline several work processes that the company is already working together on. Microsoft offers platforms, and apps, worldwide. It will provide different and innovative solutions for Australia once it is clubbed with TLS network solutions, dependability, and other qualities.

Notably, Telstra is working with tech giant Microsoft’s Azure as its preferred cloud provider for its current internal digital transformation.

GOOD READ: Telstra share price under pressure, what is majorly hurting the Telco?

How is Microsoft treating the partnership?

Satya Nadella, CEO, Microsoft said that the extensive adoption of cloud and 5G technology would produce new prospects to the world and in Australia.

On Friday, Telstra’s CEO Andrew Penn joined Microsoft CEO Satya Nadella, and other executives announced the collaboration on a virtual panel. The team talked about digital technologies bringing alterations to the businesses, and the need to provide effective technologies to them to smoothen their work processes.

Nadella believes the technology is continually changing and evolving, and what does not exist right now in the digital tech industry will take place in the next five years.

Speaking on digital technology, Nadella said that every sector, be it finance or energy or telecommunication; they mirror what the software industry does. The domain knowhow does not recede but rather get amplified through real digital capacity.

Penn is leading the ambitious program at Telstra, while transforming the Company's position in the telecommunication market. He agrees to the ideas of Nadella on technology's rapid transformation. Penn explained that for the next phase of digitisation, the physical world would increasingly adopt new technologies, such as the Internet of Things (IoT).

Do watch: Telstra Appoints New Director To Its Board | ASX Market Update

Technology is transforming every sector

The world has digitised in the last several decades, and the transformation has proven to serve people well. The digitalisation has successfully changed the services, administration, or the back office of the businesses.

However, the physical world such as manufacturing, cities, buildings, mining, logistics have not been digitised yet.

So, the question remains that how the technology industry is planning on digitising the physical world. One way is to put sensors into physical assets. Telstra CEO Andrew Penn suggests that these sensors can draw information around a physical asset, which then can be secured and comprehended.

5G, and other digital resources, would play a major part to propel the current implementation of fresh technologies. 5G is essential as it is the first telecommunications network, which is designed primarily to accommodate millions, if not billions, of sensors into the physical world.

5G enables you to connect the sensors; the cloud allows one to compute capability to process all that data at scale; it provides flexibly. Moreover, AI (artificial intelligence) and machine learning are constantly evolving. It is aiming to take all the information and turn it into insights. So, the combination of these technologies together will transform the entire world over the next decade.

Must read; When Banks’ Dividends Are Under the Knife, Are Players Like Telstra Emerging as Winner?

Telstra has strengthened its ongoing partnership with Microsoft. The tech giant MSFT’s Azure will provide a digital base for telecom company's strategy to smoothen and refine its operation. Both the companies have serial existing steams of work.

Recently PlayStation 5 a hugely popular gaming product went up for pre-order last week. Notably, the stock vanished from the market in a couple of hours. The same situation has arisen for its rival product by Microsoft Xbox. The tech giant MSFT’s Xbox Series X is flagship product launching in the next-gen gaming console space.

Many Australians missed their chance to purchase the newly launched Series X as the stock got over quickly from its sellers like JB Hi-Fi, EB Games, and even Microsoft itself.

Telstra has brought joy to those customers, as the Company is providing a way out to get the taste of the (next generation) console. During the launch the console will be offered at an attractive price as the consumers are not required to pay any upfront money.

Must read; Is Telstra building a War Chest?