Crude oil recovering steadily, Tailwinds to drive the pace over 2020

Crude oil prices slumped after 3 days of consecutive gains following the resumption of crude oil facilities in the Gulf of Mexico. Hurricane Sally finally diminished after disrupting oil operations for 5 days. The OPEC+ group had been maintaining deep supply cuts to keep the oil prices under control, avoiding building up of scenarios similar to April stabilising the oil markets.

The 1-month WTI crude oil benchmark traded at US$41.22 a barrel on 18 September 2020 registering a decline of over 49% since the beginning of the year. The WTI crude oil futures had hit sub-zero levels in April after the crude oil contracts experienced no takers on the backs of weak demand and oversupply of crude oil.

Must Read: How Are Global Crude Oil Giants Responding to the New Normal?

The 22nd meeting of OPEC’s Joint Ministerial Monitoring Committee (JMMC) was concluded on 17 September 2020 under the chairmanship of the Saudi Arabian Ministry of energy, HRH Prince Abdul Aziz Bin Salman and the Co-Chair Russian minister of energy, HE Alexander Novak.

The Committee evaluated the crude oil market dynamics of August and applauded the joint efforts of the OPEC and non-OPEC countries. The JMMC further agreed to extend the compensation period till the end of December 2020 on request from several underperforming countries.

The member countries in conformity indicated signal to stabilise the market further and ensure pre-emptive measures are in place to tackle any market disruptions. The recent JMMC meets have been focussing on rebalancing long-term oil markets and also for addressing any issues faced or raised by the members in efforts to relax any geo-political tensions whatsoever further. 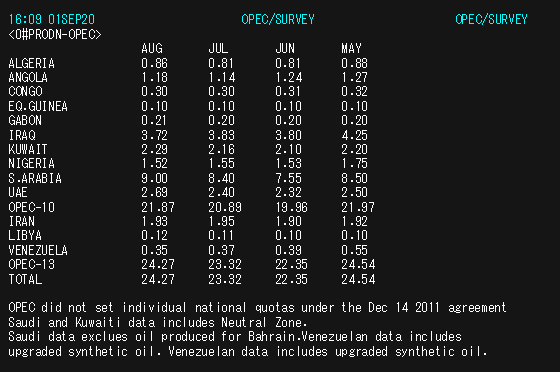 The updated Short-Term Energy Outlook (STEO) from the US EIA for the month of September expects heightened levels of uncertainty as the reopening efforts continue alongside increasing count of infected cases globally.

Read Here: US stockpiles Dry up, a big boost for oil prices. Is oil headed higher from here?

The decline in demand was hugely supported by massive voluntary production cuts of crude oil by OPEC and partner countries as well as the reduced drilling and production cuts across the United States on accounts of weak oil prices. The supply is forecast to grow to an average of 99.3 million barrels per day in 2021.

2020 has proved to be a dismal year for thermal coal with major questions arising on securing the financing for projects and the raising environmental awareness. In response to the pandemic, almost all global economies have announced stimulus packages mostly focussing on green infrastructure and transitioning to cleaner energy sources.

It seems that the virus which has affected humans at large has also infected one of the largest committees. Slogans such as “less crude, more Hydrogen” may actually prove to be cataclysmic for the crude oil in the longer run.

The recently concluded Asia Pacific Petroleum Conference (APPEC) was organised virtually for the first time in the 36-year history, observes major energy players discussing plans on utilising Hydrogen as an alternative for current fuel in the upcoming decades.

Australia proposes to pay for Refiners to continue operations

Australia on 14 September announced incentives worth $2.3 billion to keep the 4 active oil refineries operating for next 10 years along with further boosting up infrastructure to build fuel storage infrastructure to combat fuel crisis as part of long-term measures.

All active refiners have welcomed the proposals, but any commitments are yet to be made on this front. The recent past decades have observed closure of previously existing refineries raising uncertainties over the future of refineries in Australia.

Australia at present faces shortage when it comes to liquid fuels, particularly gasoline and diesel. With the boosting of storage infrastructure, the national inventory of these refined products is anticipated to increase easing up the ongoing fuel crisis scenario.

With major mining and resources operations within the country using diesel run generators as a backup source of power, even the industrial demand for these fuels remain strong in the domestic market.

Australia focuses on reliability and affordability of the liquid fuel supply while also investing in developing a superior supply chain infrastructure. Australia remains committed to seek and develop a sustainable solution for ensuring its energy crisis.