The Justin Trudeau-led Liberal Party is heading back to power in the wake of 2021 federal snap election. Latest numbers posted on Election Canada show that the Liberals are running ahead with 158 out of the total 338 seats, with main opposition Conservatives trailing with 119 seats.

Now that projected results are out, the next question that pops up is, what’s next?

The Liberals had made a set of promises during the election campaign that can be expected to see the light of day in the wake of their victory. Let’s take a closer look at these plans.

One of most prominent promises that stood out during the Liberals’ campaign trail was that of hiking the taxes for Canada’s most profitable financial institutions.

Prime Minister Trudeau had pitched that corporate tax rate for banking and insurance institutions with over a billion dollar earnings a year would be raised from 15 per cent to 18 per cent.

The plan triggered some negative reaction, especially based on the argument that the government should be targeting other sectors that flourished during the pandemic, such as the tech sector.

Some market experts, however, have noted that hiked taxes from profitable enterprises could fill up the government’s coffers to support its spending plans.

At the moment, however, not much is known about this tax plan. 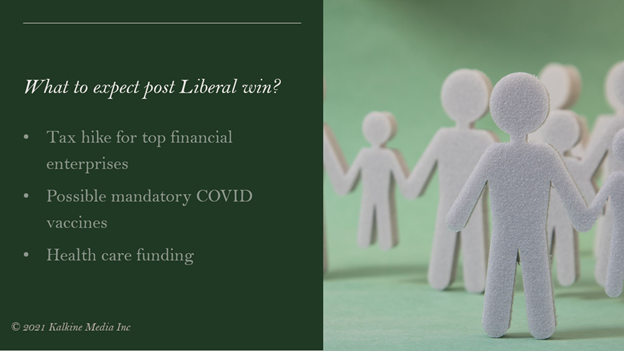 Prior to the announcement of the 2021 snap polls in August, Prime Minister Trudeau had emphasized that COVID-19 vaccination would become mandatory for all federal government employees.

Now that he is heading back to office, this decision can be expected to see implementation.

Another major campaign promise made by the Liberals, one that probably played a significant role in their victory, was to improve the health care system with some major funding.

Mr Trudeau had promised to provide a C$ 3.2 billion funding to all Canadian provinces and territories for the purpose of bringing aboard 7,500 new doctors, nurses and practitioners.

Apart from these, Mr Trudeau had made ample other promises ahead of the elections, including housing-focused measures such as introducing a tax-free First Home Savings Account, doubling tax credit for first-time homebuyers, etc.

Now that he was been voted back to power, it is time to see how his government acts on these promises.