The annual inflation rate surprisingly slowed in Q3, fueling prospects of further stimulus by the Reserve Bank to accelerate the economy.

CPI is a measure of inflation for NZ households and records changes in the prices of goods and services.

As per the latest statistics released by Stats NZ on 23 October, CPI rose 0.7% in the September 2020 quarter compared to previous quarter when it fell to -0.5%. 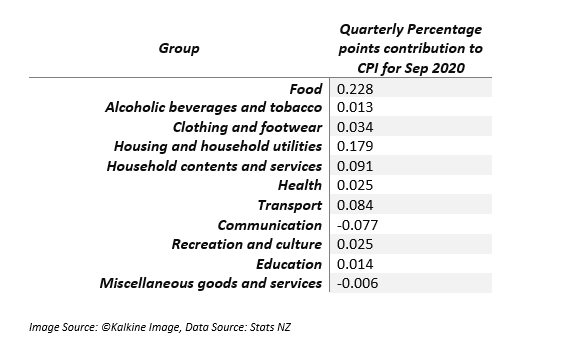 The data showed that CPI rose 1.4% in the September quarter from a year earlier. Inflation figures were driven by a 3.7% rise in food prices, which increased due to the 15% price rise in fruits and vegetables.

Housing and household utilities was another contributor that rose by 2.6% affected by higher prices for rents, purchase of housing and property rates.

In the August Monetary policy statement, RBNZ had predicted a change of 1.1% quarter on quarter and annual change of 1.8% in inflation. Bank economists had been expecting inflation at less than 1.7%.

Housing prices surged to record levels as RBNZ monetary policy and government spending rubbed salt in the wound since COVID-19.

DO READ: Zoom Your Lens Over Bright Spots Dazzling in the NZ Economy

As per Core Logic House Price Index (HPI) for September, the housing market rose 7.6% YOY in the month. Also, property prices across NZ increased by 0.8% to a national average of NZ$743,678 over 3 months to September showing signs of growth, as per the Property Market Consultant.

The rise in values was witnessed across each of the 6 main centres in NZ. However, Tauranga was the only exception that saw a minor drop of 0.3% in the month.

As per Nick Goodall, Property Market Consultant’s head of Research recognised that tight supply of available listings and availability of cheap money due to ultra-low mortgage rates are protecting the property market from falling, with the rising unemployment as one of the factors to watch.

RBNZ recently affirmed its commitment to keep interest rates low while ensuring confidence and credit stays in the economy. As unemployment is likely to increase, economic projections remain skewed on the downside due to expiration of wage subsidy and proactive phasing out of the mortgage deferral scheme.

Real Estate Institute’s House Price Index rose 11.1% YOY to 3145 in September, crossing the 3100 mark for the first time in NZ.

Bindi Norwell, RBNZ Chief stated that she would not be surprised if RBNZ lowered rates further. She noted that low-interest rates and easing lending restrictions by the Reserve Bank to accelerate NZ economy amid COVID-19 had been the primary drivers behind the rise in house prices. However, extremely high prices would not be sustainable for the local economy, she noted.

Kiwibank Chief Economist Jarrod Kerr stated that weak inflation reading only strengthens the case for RBNZ to do more to lower interest rates for providing a boost to inflation and reach its target range of 1%-3%.

He also anticipates RBNZ to implement Funding for Lending programme prior to 2020 and slash interest rate into negative territory as early as February. He projects inflation to drop towards 0% in 2021.

MUST READ: Funding for Lending (FLP) a big boon for NZX Banks

He added that inflation was likely to be too low and unemployment too high, with the economic rebound set to stagnate, job losses projected to increase and a more difficult time ahead. For now, the argument for more stimuli remains strong.

Westpac Senior Economist Michael Gordon also pointed that RBNZ was mindful of the threats to its inflation forecast and that exceptional monetary policy support would be needed for a long duration.