A little over a month after its announcement, the 2021 federal snap election saw Canada re-elect Prime Minister Justin Trudeau back to power.

Let’s quickly glance through the key insights of this election and its outcome.

Trudeau is set to head back to the prime minister’s office for the third consecutive term, which makes him one of few Canadian leaders to do so.

His Liberal Party won 158 of the 338 federal ridings in the 2021 snap polls, as per the numbers posted by Election Canada.

Despite bagging most of the seats, however, the Liberals are set to form a minority government as the failed to secure the 170-seat mark on their own.

The Liberals’ main opponent, the Conservatives, were behind with 119 seats.

This will be the second time that Trudeau heads a minority government. His party secured a minority cabinet in the 2019 federal election as well, and had last won a majoritarian parliament during his first prime ministerial election in 2015.

In his victory speech on Tuesday, September 21, Prime Minister Trudeau said that Canadians have given his party a “clear mandate”. 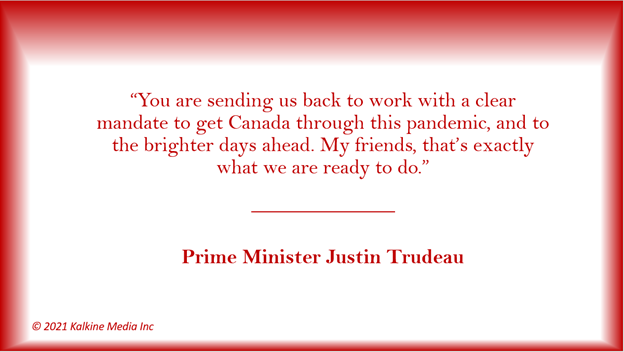 With a minority government, however, the Liberals will require the support of other parties to push through legislation in the House of Commons.

Trudeau is expected to have a ‘stable’ minority government with potential allies New Democratic Party, which bagged 25 seats, and the Bloc Quebecois, which won 34.