Rishi Sunak, Chancellor, UK Treasury will be announcing the largest public borrowing program in the British history since the second world war next week. It will take the total value of government borrowings for this financial year to £400 billion.

It will amount to almost 20 per cent of the nation’s GDP which is double the peak of 10 per cent attained during the 2008 financial crisis.

The nation has already borrowed a hefty sum of £215 billion from April to October this year to cope with the unprecedented impact of the pandemic.

The Office for Budget Responsibility would be publishing the new borrowing forecast on 25 November. Sunak is also likely to announce government spending plans for the next financial year.

The total value of the public debt stood at close to a 60-year high value by the end of October, as per latest government statistics. 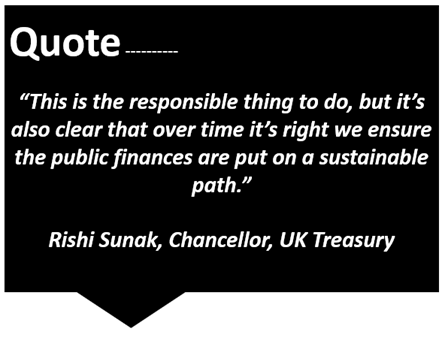 What will the plans entail?

If media reports are to be believed, Sunak would be freezing the salaries of policemen and teachers in the new plan. Changes in the foreign aid spending are also on the cards.

Higher expenditure would be going into the infrastructure segment, according to sources. It would be targeted to bridge the regional imbalance, as promised by the PM Boris Johnson earlier in his 2019 election win.

The new infrastructure strategy is expected to include programs for fiber broadband, flood defence, and transportation.

Sunak had to abandon its long-term development plans for the UK and undertake emergency short-term measures like the furlough scheme to protect jobs, as the pandemic struck the nation.

New priorities for education, housing, trade, and transport are also on the cards.

The Bank of England has forecasted that the economic output would shrink by 11 per cent this year due to pandemic’s disastrous impact.

According to the think tank Resolution Foundation, tax rises worth £40 billion per annum would be required every till 2024 to stabalise the government’s fiscal situation, given the high expenditure it is forced to take up at present.

The total debt had surpassed 100 per cent of the British GDP by the end of October this year. it was valued at a whopping £2.077 trillion.

The British economy had displayed a better than expected growth of 15.5 per cent for the third quarter from July to September 2020. The quarter’s tax receipts were slightly higher than the previous quarter’s collections, as per latest government estimates. It was driven by higher collections from tobacco and hydrocarbons.

The UK Debt Management Office is also expected to publish its bond sale plans next week. Right now, the financial markets are lucky to be funding the borrowings at record low interest rates, noted the market experts.

The Citi analysis predicted that over the next five years, the UK government would have to borrow over £800 billion more than what was forecasted in March 2020 to sail through the coronavirus crisis.

At the same time, the International Monetary Fund has cautioned national governments to not be overtly concerned about the rising levels of public debt. The fund insisted that the first priority has to be to ensure an effective economic recovery.

Any ongoing job support schemes should not be cut short abruptly. Removing the support measures could have lasting damaging effects, it revealed.