Mogo Inc (TSX: MOGO), a Canadian fintech company, saw its stock rise by roughly 18 per cent on Wednesday, March 23, in the face of its fourth-quarter results for fiscal 2021.

So, let us look at Mogo Inc’s financials and stock performance in detail.

The Vancouver-based financial technology firm recorded a year-over-year (YoY) revenue surge of 70 per cent to C$ 17 million in the fourth quarter of fiscal 2021. Meanwhile, its 2021 total revenue amounted to C$ 57.5 million, up by 30 per cent from 2020.

Mogo added that its combined cash, digital assets and investments stood at C$ 193 million including its investments (book value) in Coinsquare, a crypto platform, at the end of fiscal 2021, up from C$ 30.6 million a year ago. 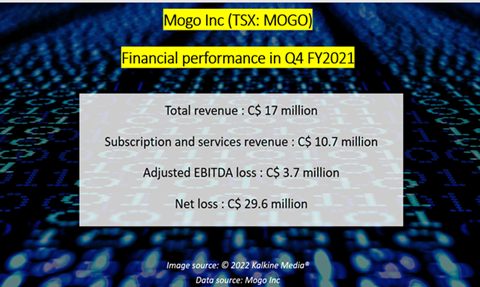 Mogo’s stock climbed nearly 33 per cent in the last one week and closed at C$ 3.62 apiece on Wednesday after clocking a day high of C$ 3.70. It noted a trading volume of 1.5 million this day.

Considering the ongoing investments and growth opportunities, Mogo expects its total revenue to reach somewhere between C$ 75 million to C$ 80 million in fiscal 2022. It also anticipates improved adjusted EBITDA as a percentage of its top line in the second half of 2022.