Stocks of Bitfarms Ltd. (TSXV:BITF) gained attention ahead of the market open on Friday, October 1, as it became one of the top trending stocks in the country. The interest in this crypto stock could be due to the latest production update from the company.

The Toronto-based company is involved in mining Bitcoins, and it has released updates of its production for its shareholders. On October 1, Bitfarms said that in the third quarter of this year, the company achieved its highest quarterly Bitcoin production for the year as it capitalized on macro events in China and growth investments throughout the year.

The Bitcoin production increased to 1,050 BTC, up 38 per cent in comparison to the second quarter of this year. Emiliano Grodzki, CEO and Founder of Bitfarms, said that China's crackdown has resulted in the largest-ever reduction in Bitcoin's network, however, the network is experiencing a steady recovery.

According to Bitfarms, 2021 has been a transformational year for the company and it is expanding rapidly. The scheduled monthly deliveries are at 55,000 miners over the coming 15 months and it is coming up with online high-power production facilities.

The company claims that it is inching closer towards achieving the target of increasing the hash rate to three exahash per second (EH/s) by the first quarter of 2022. Notably, by the end of next year, Bitfarms is looking to increase the hash rate to eight EH/s.

In September 2021, Bitfarms mined 305 new Bitcoin, which means it mined around 10 BTC daily. In the first nine months of this year, the crypto mining company generated 2,407 BTC and deposited 2,312 Bitcoins into custody through September 30, representing around 96 per cent of Bitfarms' 2021 Bitcoin production. 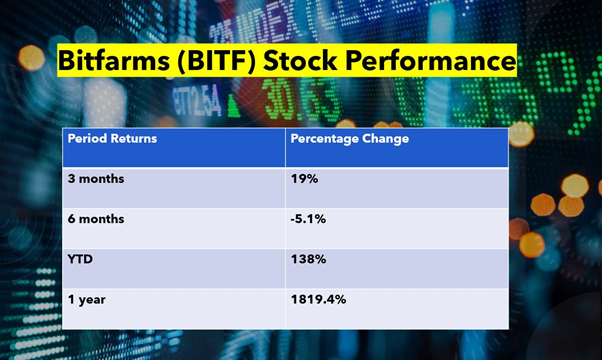 As the company is progressing rapidly, Bitfarms could be an option for people who are looking to diversify their investment portfolio by investing in companies involved in crypto mining.