Electric vehicles (EVs) stocks are back in the limelight after Lucid Group (NASDAQ: LCID, LCID: US) and Tesla (NASDAQ: TSLA, TSLA: US) announced some major developments.

Lucid Group has announced its plans to construct its first manufacturing facility abroad in Saudi Arabia. The American EV company signed an agreement with the government of Saudi Arabia for this facility, AMP-2, which will have a local capacity of producing 155,000 EV units in a year.

Lucid added that it estimates to receive funding and incentives of up to US$ 3.4 billion, from the government of Saudi Arabia over the next 15 years to construct and operates the AMP-2 facility.

Tesla, on the other hand, said it has increased its production capabilities in the last few months with two new factories, Giga Berlin and Giga Texas.

With Lucid striking this major EV deal with Saudi Arabia and Tesla ramping up its production, let us look at three Canadian EV stocks.

Vicinity Motor Corp holds a market capitalization of C$ 79 million. The EV marker had a debt-to-equity (D/E) ratio of 0.21, which says that it mainly utilizes equity financing over debt.

Vicinity Motor secured an order backlog of more than US$ 90 million in Q1 FY2022. The junior EV manufacturer held cash and cash equivalents (CCE) of US$ 11 million on its balance sheet at the end of the latest quarter.

GPV stock plummeted by over 70 per cent in 12 months. Refinitiv data suggests that GPV is on a bearish trend with an RSI value of 28.02 and its Moving Average Convergence/ Divergence (MACD) indicator below the zero line. 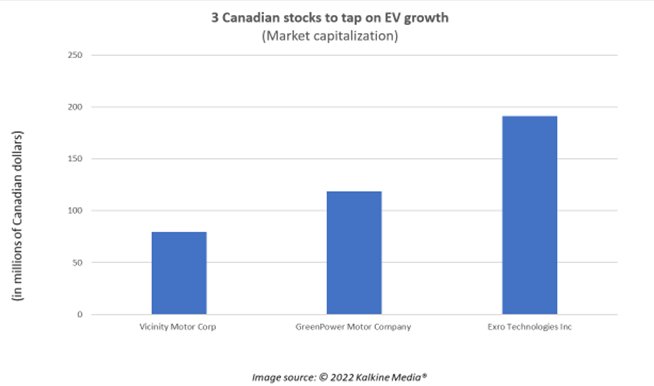 Though Exro Technologies is not an EV maker, it designs and commercializes electronic technologies for electric machines, including cars, trucks and buses, thus, serving the EV market. Such EV component suppliers are likely to benefit from the growing EV production.

Investors should note that these Canadian EV stocks hold less market capitalization, and their valuation metrics are also negative, indicating a high risk. Growth stocks as such generally have a reputation for high risk, but they can provide notable returns if market situations favour them.