As the coronavirus pandemic forces people to stay indoors, the consumption of content on digital platforms has surged. Online streaming platforms such as Netflix (NASDAQ:NFLX or NFLX:US) and Amazon Prime (NASDAQ:AMZN AMZN:US) are seeing a rush of subscribers and hence, a rise in revenues. Over-the-top (OTT) businesses are coming out with original content to win more consumers and expand their subscription base. With theatres shut, these streaming platforms are offering filmmakers an option to release their movies digitally.

Netflix has managed to build a good Canadian subscriber’s base since its launch in 2011.  The company added one million subscribers within 10 months of its debut. By the end of 2019, it had nearly seven million subscribers in Canada — that is almost one-fifth of the country’s total population.

In 2011, Netflix introduced three plans, DVD-only, DVD plus streaming plan, and online streaming for its subscribers. At the time, online streaming was its secondary operation. Since then, the company has swelled to magnus proportions, earning a spot in the big tech FAANG stocks.

The online entertainment company reported U$1.74 earnings per share (EPS) in the third quarter of 2020.

Netflix’s posted total revenue of US$ 6.44 billion in Q3 FY20. The streaming giant added 2.2 million new subscribers in Q3 FY20, approximately 67.6 per cent decline, compared to 6.8 million subscribers in the same quarter of the last fiscal year. The stock tumbled almost 6 per cent after missing the estimates in Q3, 2020.

Netflix share price has grown over 24 per cent in the last six months. The stock has zoomed almost 78 per cent since the pandemic-led crash on March 17. The company scrips reported a nearly 62 per cent increase year-to-date (YTD). The average trading volume of the stock is 6.5 million over the last 10 days. Netflix’s current market capitalization is US$ 231.7 billion. 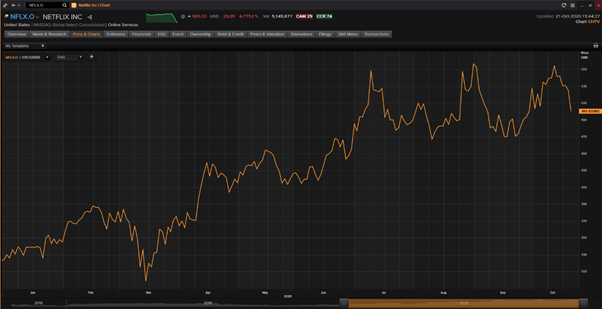 The company has not paid any dividend to its shareholders till date. The company’s earnings per share (EPS) is C$ 5.93. Its price-to-earnings ratio is 89.5, and the price-to-book ratio is 24.8. Netflix’s return on equity (ROE) is nearly 35 per cent. Its price-to-cashflow ratio is 1559.7.

Toronto-based Corus Entertainment Inc is a media and entertainment company that operates in the diversified content and media industry. The company has two business operations – television and radio. The television division has a collection of paid television services channels. The radio business segment operates several stations that provide both the music, news, and talk radio markets. The company generates most of its revenue from Canada. It also offers children's publishing and animation, which is sold internationally.

Corus share price has surged almost 18.5 per cent in the last three months. The stock has rebounded over 48 per cent since the pandemic-led crash on March 24. However, the company scrips posted a nearly 44.5 per cent decline year-to-date (YTD). Corus’ current market capitalization is C$ 604.6 million.