Cannabis was legal in Canada since October 2018 and is a critical investment option for investors. On Tuesday, November 9, the S&P/TSX Cannabis Index plunged by 0.33 per cent. However, it has noted a month-to-date increase of 13.25 per cent.

However, cannabis could be federally legalized in the United States after GOP Rep. Nancy Mace led a marijuana legislation bill. If this bill succeeds, it could be a good thing for Canadian pot producers as they could be early suppliers to the U.S. market. Further, this could boost their revenues and overall profits, which ultimately stimulate their stocks’ performances.

Investors are also closely following this development to reap the possibly significant benefits. On that note, let us discuss five Canadian cannabis companies listed on the TSX. 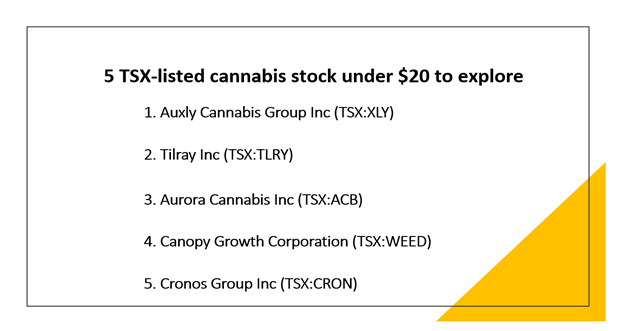 Auxly Cannabis Group Inc, headquartered in Toronto, which offers consumer-packaged cannabis products, saw its stock value at C$ 0.31 apiece on Tuesday, November 9, up by a whopping 10.714 per cent after the development from south of the border. 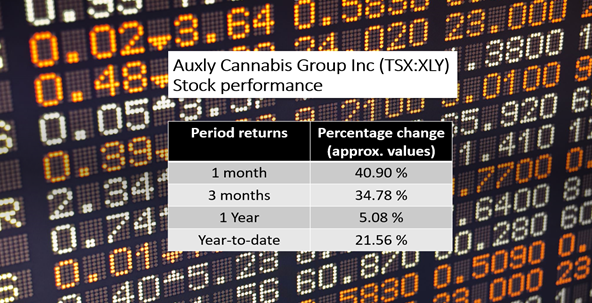 Its stock price has jumped by about five per cent over the last year, while on a quarter-to-date (QTD) basis, it has spiked by roughly 27 per cent.

Canadian cannabis giant Tilray Inc, which produces and markets cannabis for medical and recreational purposes, noted its stock price close at C$ 15.39 apiece on November 9, down by 0.065 per cent.

Edmonton-based Aurora Cannabis Inc provides for medical and consumer markets worldwide through a portfolio of cannabis brands like MedReleaf, Reliva, Aurora Drift and others.

On November 9, Aurora noted its stock close at C$ 9.30 apiece, up by 1.974 per cent. Its stock has jumped by more than three per cent over the last month. In past three months, its stock has ascended by roughly two per cent.

Further, it has surged by more than 13 per cent month-to-date (MTD). It has yielded a return of approximately six per cent on a QTD basis.

Smith Falls-headquartered pot maker Canopy Growth Corporation saw its stock value at C$ 7.417 per share on November 9, up by 7.417 per cent.

On a week-to-date (WTD) basis, it has jumped up by about 19 per cent. The stock has delivered a MTD return of approximately 11 per cent.

With a market capitalization of C$ 6.83 billion, Canopy Growth held a price-to-book (P/B) ratio of 1.957 at the time of writing.

On November 9, the stock of Cronos Group was valued C$ 7.11 apiece, down by 14.85 per cent. The CRON stock has ascended by more than four per cent in the past month. Further, it has gained by nearly 11 per cent MTD.

On the valuation side, Cronos Group held a market capitalization of 2.65 billion and a P/B ratio of 1.30, as of November 10.

Investors should understand that the cannabis space is highly volatile and exposed to political scenarios of different countries. Hence, it is essential note the risk-return factor that surrounds the cannabis space and an individual’s risk capacity as well.