What is happening with ByteDance IPO? All you must know

ByteDance, the owner of popular video-sharing app TikTok, made headlines last year when it expressed its intentions to go public in the equities markets.

However, in June 2021, it was widely reported that ByteDance had put its public debut plans on hold after regulatory authorities in China told the company to address data-security risks.

Last year in March, ByteDance founder Zhang Yiming reportedly shelved the initial public offering (IPO) plans after meeting with cyberspace and securities officials. Additionally, the public debut plans were delayed as the company did not have a chief financial officer, claimed reports.

ByteDance is a technology company and operates several content platforms meant for education, entertainment, and other purposes.

Overall, 2021 was a rough year for Chinese companies going public in the US equities market. Since the past few years, China has tightened its grip over tech giants to address issues ranging from alleged monopolistic behaviour to data security.

The prospects for Chinese companies to go public in the US were stalled after it announced plans of delisting DiDi from the New York Stock Exchange (NYSE) within months of its public debut. 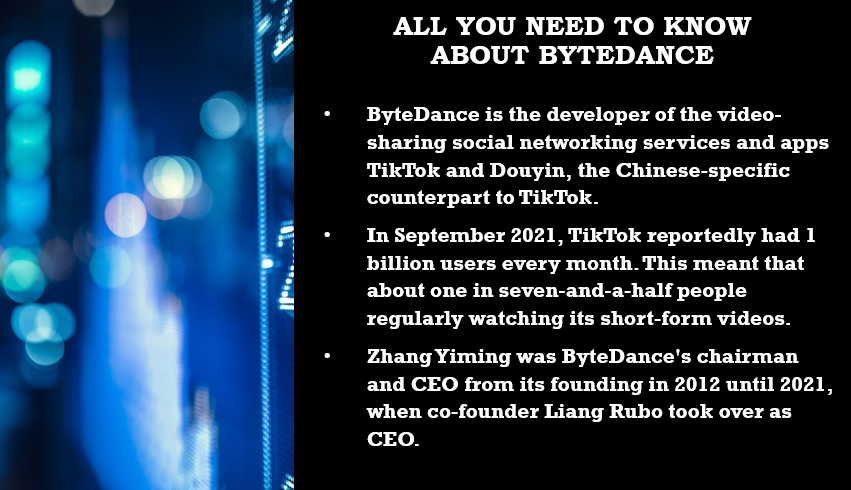 ByteDance is not publicly listed, and there has been a boom in the US IPO market, led mainly by tech companies. Thus, intermittent rumours of ByteDance looking to go public keep arising.

In 2020, rumours surfaced that ByteDance would partner with Walmart and Oracle to go public and dodge the ban that Donald Trump was contemplating.

However, Mr Trump lost the election, and the IPO plans got shelved. Last year, published reports claimed that ByteDance would go public in the US or Hong Kong, but that did not happen.

Some rumours suggest that the owner of various content sharing platforms could go public this year.

Amid data security concerns of the Chinese authorities, it appears that ByteDance won't consider going public in the United States at the moment.

DiDi chose to go public on the NYSE, and that did not go very well for the ride-hailing company. Hence, it is highly unlikely that ByteDance would consider an IPO as it holds a lot of data due to TikTok's popularity.

The Chinese company is also the owner of platforms like Toutiao and BytePlus.