Canada Budget 2022: What are Freeland’s plans for cost of living?

Going into planning the budget, the Trudeau government had their work cut out for them. They needed to balance reducing the deficit with spending on healthcare and housing amid high inflation. They also had to weigh climate actions against military spending.

As per Statistics Canada, the inflation rate of 5.7 per cent struck a 30-year high in February. So, what has Ms Chrystia Freeland and company added to the budget to ease the cost of living for Canadians? Let’s dive into it.

First, let us look at the issues at hand as the budget was being planned. It may be fair to say that Canada has been able to pull back its economy since the pandemic struck.

While that may have been quite an achievement, inflation is at historic levels. There is also the issue of housing affordability.

This may make the Liberal-NDP coalition want to push for more social care programs, but they have been handing out stimulus packages and now there is the deficit to deal with.

What are the government’s plans for the cost of living?

Probably the biggest way the budget will make a difference in the cost of living is in housing. Housing could be the biggest expense for many Canadians, and with the Bank of Canada likely seeking an interest hike of 50 basis points soon, it could take a toll on mortgage payers.

Some experts were of the opinion that the 2022 budget may go down in history as the “housing budget”. Indeed, it was one of the biggest campaign talking points for the Liberals during the snap election.

The government has proposed to ban a majority of foreigners from buying up non-recreational, residential properties in Canada. Shutting off the tap on foreign money may bring some respite from rapidly spiking prices.

However, it would seem that supply is central to fixing the situation. The government has pledged C$4 billion to build 100,000 new urban homes by 2025. Toward co-operative and low-cost housing, C$2.7 billion has been pledged. In total housing was given C$10 billion.

Also read: Canada budget 2022: What to expect & what are the big questions?

Plus, there is the savings account that will allow first own home seekers to save up to C$40,000 and investment gains here will be tax-free. To provide relief with closing costs, First-Time Home Buyers’ Tax Credit will be doubled from C$750 to C$1,500.

Also read: What is Canada's Federal Budget and how it can impact you?

Considering that one in three Canadians lacks dental insurance, another budget initiative that may provide relief is dental care. Health Canada is to be given C$5.3 billion over five years to create a national dental care plan.

By 2025, the national dental care plan will be fully in force. It will start with under 12-year olds in 2022 and expand to under 18-year olds, seniors and people with disabilities in 2023. Households earning over C$90,000 are not covered. 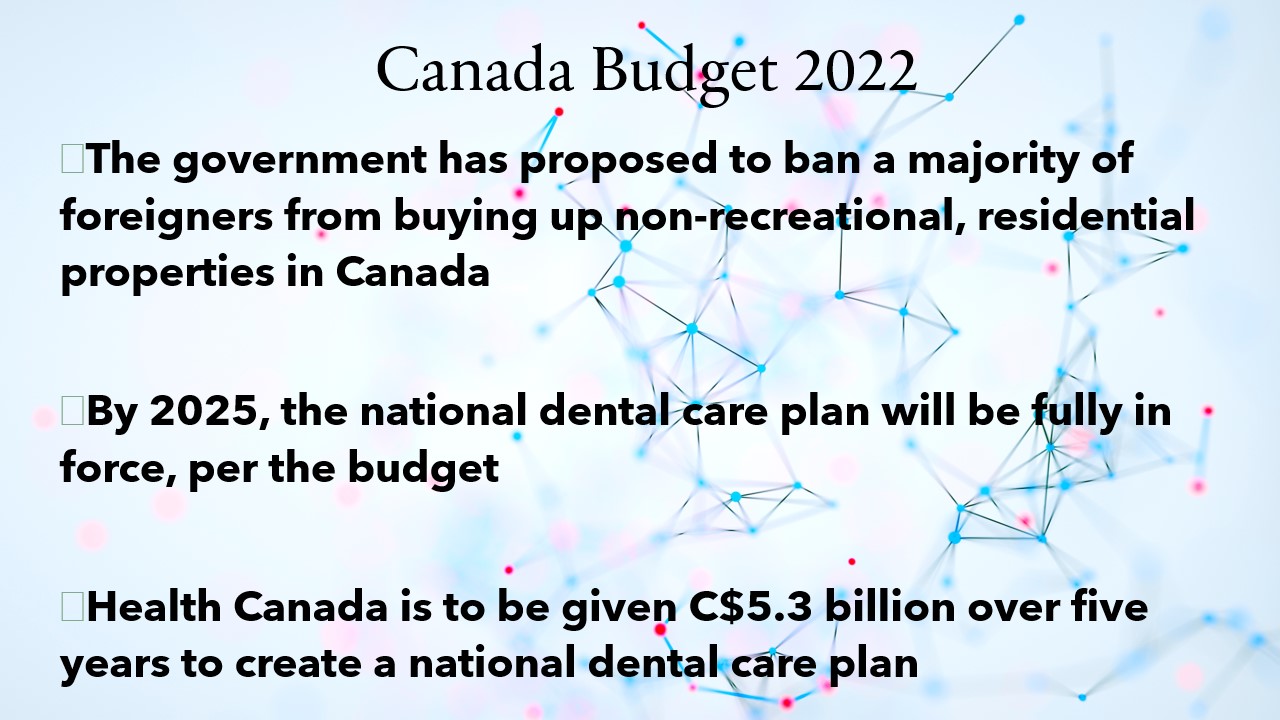 Usually, despite inflation alcohol consumption may not come down. Excise duties on low-alcohol beer with an alcohol content of less than 0.5 per cent no longer exist.

For women, C$25 million will go towards creating a Menstrual Equity Fund to make menstrual products more accessible for women.

Some gaping issues that the budget does not really address are pharmacare which was not expected given that the Liberals and NDP have indicated it as a priority. There are no direct fixes offered for inflation.

However, it was predicted that this would be a “housing budget” and it does address housing in a major way.