Despite delivering decent financial results, many ASX-listed technology companies experienced a drop in their share prices because of the weak Wall Street performance during September 2020.

The fall in Wall Street stocks was due to massive sell-off of the shares of some of the big players listed on NASDAQ. The decline also impacted Australia’s tech index, S&P/ASX 200 Information Technology, which dropped significantly during September 2020.

In this article, we would look at some of the ASX-listed stocks whose shares delivered a negative return in the last month, though they have had a decent operational and financial performance.

Data#3 Limited is a leading Australian IT services and solutions provider that focuses on helping customers solve complicated business tasks make use of innovative technology solutions.

In FY2020, DTL delivered a record result which reflects the inherent strength and relevance of the solution offered in the evolving market. Further, the Company’s balance sheet remains strong with negligible debt. 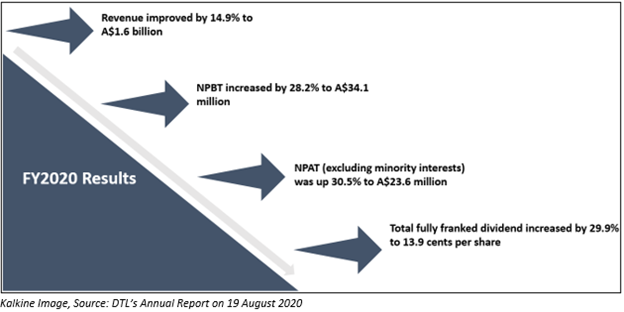 Chief Executive Officer and Managing Director Laurence Baynham stated that the Company is well placed. The long-term financial goal of the Company is to deliver sustainable growth.

Afterpay is a leading BNPL player in Australia and reported a significant drop in its share price during September 2020 because of weak Wall Street performance. However, in the past six months, the shares have delivered an exceptional return of 561.37%. The performance was decent in the last three months, providing a return of ~25%. On 25 September APT shares closed trading at A$75.950, up 2.441% from the previous close.

Afterpay continued its strong momentum in FY2020 despite the challenges imposed by COVID-19.

Recently, the Company announced that its subsidiary Clearpay (Europe) Limited entered into a Share Purchase Agreement to acquire Pagantis. The Company is making efforts to expand into new markets to take advantage of on strong consumer and merchant demand and to expand its global footprint.

BNPL player Sezzle Inc allows shoppers across the US and Canada to take control of their expenses. Sezzle shares have delivered an astronomical return of over 1500% in the last six months. The stock performance was quite impressive in the previous three months, providing a return of over 51%. However, in the last month, the shares delivered a negative return of ~26%. Sezzle shares ended the day’s session at A$6.550 on 25 September, up 1.236% from the previous close.

Recently, on 23 September 2020, Sezzle announced its business partnership with Ally Lending which will allow the Company to provide long-term instalments to its merchant and consumer customers.

DO READ: Why are these 3 ASX-Listed Share Price Under the Lens - Sezzle, Splitit & ASM?

Integrated Research Limited offers performance management solutions and user experience for Payments, Unified Communications, and IT Infrastructure. Like most technology stocks listed on ASX, IRI experienced a drop in its share price during September 2020. In the last month, the shares have delivered a negative return of 16.66%. However, in the previous six months, the shares have produced an impressive return of over 52%. On 25 September, IRI shares closed at A$3.600, up 0.559% from its previous close.

On 20 August 2020, the Company released its FY2020 results and reported a 10% growth in its profit after tax to A$24.1 million as compared to the previous corresponding period. The Company’s result was at the top end of the guidance announced on ASX on 17 July 2020.

Infomedia Ltd is a software provider in service, parts, and data insights solutions to the automotive industry worldwide. IFM shares also delivered a negative return of 9.30% in the last one month. However, it generated a decent ~16% return in the previous six months. By the end of day’s trade on 25 September 2020, the shares settled at A$1.600, up 2.564% from the last close.

Mr Jonathan Rubinsztein, CEO Infomedia Ltd, said that FY2020 was a challenging year and simultaneously rewarding for the Company. In the first half, the Company completed the rollout of a global contract and a strong cadence of sales across each region. It also made gradual growth and effective early-stage pilots of the Next Gen parts and service platforms.

During the period, Infomedia raised A$83.9 million via Institutional Placement and SPP to support its growth strategy.

ELMO shares have delivered a decent ~23% return in the last six months. However, in the past one month, the shares have provided a negative return of 12.52%. By the end of the day’s trade, ELO shares have surged by 5.368% and settled at A$5.300.

Despite FY2020 being a challenging year due to COVID-19, the Company registered another year of robust growth.