When it comes to gauging the momentum of a security, there are many indicators available such as the Commodity Chanel Index (CCI), Stocastic oscillator, Rate of Change (ROC), etc. However, one indicator –the Relative Strength Index (RSI) – introduced in June 1978 by J. Wells Wilder, is probably the most popular amongst all of them. 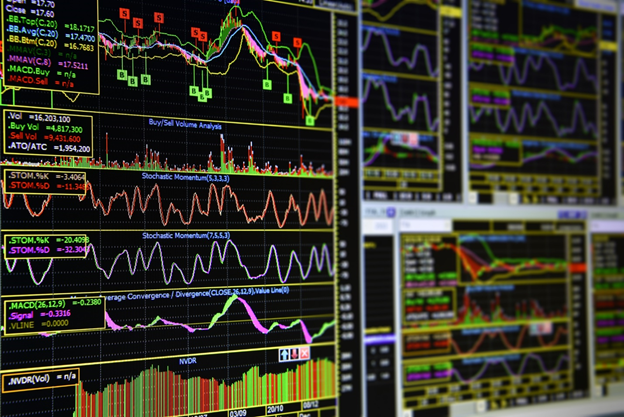 Just like other oscillators, RSI oscillates between upper and lower bounds (0 and 100 respectively) to indicate overbought/oversold levels. The indicator is based on the assumption that after a significant advance in a relatively short span of time, the security tends to become overbought and hence is poised for a correction. Similarly, when a security has fallen sharply in a short span, it tends to become oversold, indicating the likelihood of a bounceback.

Read More: Volume; Why It is a Prominent data in Technical Analysis?

How is RSI calculated?

How to make decisions with RSI

As the RSI measures the intensity with which a security has risen or fallen, it is up to the user to decide the RSI levels where he would consider the security to be overbought/oversold. Traditionally these levels are below 30 for oversold and above 70 for overbought. However, they can be modified to 20 and 80 as well or any other level as per the analyst. 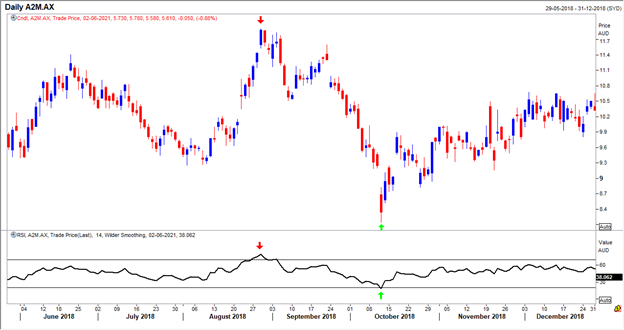 This is the most common use of the RSI. However, with the RSI being a very versatile indicator, there are quite a few ways to interpret this indicator.

Although the RSI is not a trend following indicator, some analysts keep a close eye on level 50. Being the mid-point of the entire range, it also helps to figure out the current bias of direction of the security. If RSI is below 50, the trend could be interpreted as negative and above 50, a positive trend.

Indicators which are based on price, or in other words are derivatives of price, should move in tandem with the price, which is the case most often. But sometimes the indicator does not follow the price quite precisely and tends to diverge. This disagreement between the price and its indicator is called a divergence and is often an indication of a reversal. 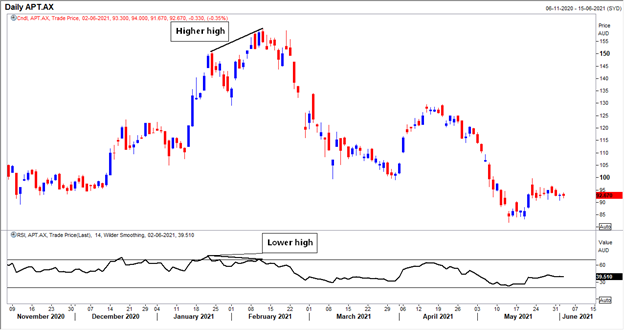 The RSI is very commonly used to spot these divergences to catch short-term tops and bottoms or to do mean reversion trading.

Another popular way the RSI generates an actionable signal is through a failure swing. A failure swing occurs when the RSI and price move diverge from each other. In an upswing, the price hits a new high and the RSI turns from the overbought levels. As the price surges further, the RSI fails to cross the previous peak and turns down once again. However, this time, the RSI breaks the low made during the previous swing, which is a sign of weakness. The exact opposite scenario occurs during a bearish move.

This signal is also interpreted as a reversal signal.

One increasingly popular and highly effective method to interpret RSI is to draw same patterns, trendlines, support and resistance levels etc. as being traditionally drawn in the price chart. 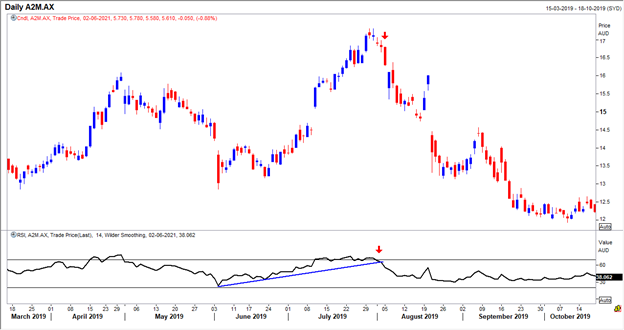 Ideal market conditions to use RSI

Just as with other oscillators, the RSI also requires a favourable market condition to be more effective and might not work in every market environment. Being an oscillator, the RSI works best in a rangebound market or a consolidation phase where the security is bouncing off between an established support and resistance level. This is an ideal condition to use the RSI to attempt to catch these reversal points in the range.

However, if the market or security is trending (either up or down), the RSI could easily fall prey to false signals. The simple reason being when the market is strongly trending, the RSI would penetrate the overbought/oversold zones and give a sell signal (on correction in a bull market) and a buy signal (on rallies in a bear market).

However, most of the time the corrections in a bull run are just an opportunity to buy and not to take a short call at the top. Similarly, trying to catch a bottom in a bear market, considering it as oversold, generally doesn’t pay well. Therefore, the use of RSI should be avoided during a strong trend.