Nano-cap stocks, also known as penny stocks, are publicly traded companies with a considerably small market capitalisation. Investments in these stocks are generally considered to be highly risky. Lately, a few nano-cap companies like Ausgold Limited, Horizon Oil and Eagle Mountain Mining have drawn the attention of market participants due to their recent announcements. The updates, coupled with the Federal Budget announcement, has instilled confidence amongst the market players.

Let us look at the three ASX-listed stocks, including their recent updates and share price performance.

Perth, WA-based gold exploration and development company, Ausgold Limited has a suite of projects situated in some of the most prospective mineral provinces in Australia. The Company’s primary focus is the 100%-owned Katanning Gold Project which has 4,000 km2 of the underexplored Katanning greenstone belt in south-western Western Australia.

On 09 October 2020, Ausgold Limited announced the results of the recent reverse circulation drilling at the Central Zone. The region lies within its Katanning Gold Project.

The new drilling that happened at Jinkas South came across a broad zone of gold mineralisation at a significantly higher grade. 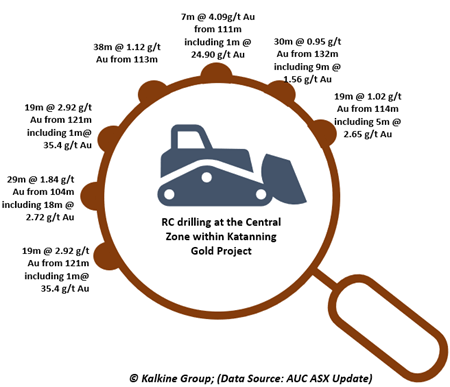 The new drilling aiming the Jinkas South lode has expanded the high-grade gold zone. It shows the growing thickness of mineralisation along strike. The recently identified zone of higher-grade gold mineralisation can add considerably to the mineral Resource estimation scheduled for Q1 2021. Further, the geometry of the site will help the project economics.

On 14 September 2020, the Company released its investor presentation and highlighted its strong result during FY2020 for the period ended 30 June 2020. HZN reported an underlying net profit before tax of US$15 million.

The FY2020 results achieved by the Company was in a low-price environment, signalling the strength of its cash flow and base business.

Further, the Company provided an overview of its portfolio.

Horizon Oil expects that FY2021 and beyond will be supported by continued strong oil production from its China and New Zealand operations. Continued water injection at Maari along with progressive planned development of WZ 12-8E oil field in China and other infill well opportunities are forecast to substantially compensate the long-term decrease in production linked with natural reservoir decrease.

In the short term, the Company’s focus would be.

Eagle Mountain Mining Limited is a copper-gold explorer that focuses on the strategic exploration as well as the development of extremely prospective greenfields and brownfields projects located in Arizona, the US.

EM2, on 12 October, announced that it had staked new claims (105) in the Oracle Ridge Copper Mine project area. The Company highlighted that the new claims are within a 5-km radius of the mine portals and has the potential of expanding the project skarn mineralisation by a further 3 km. The two potential areas are called Red Hawk and OREX, respectively.

On 06 October 2020, the Company announced that it got commitments from eligible institutional and professional investors to raise A$1.5 million before cost. The funds would be raised by issuing 5,000,000 fully paid ordinary shares in the Company at A$0.30 per Share.

The Company aims to use the proceeds to outspread the existing surface diamond drilling program at the Oracle Ridge Copper Mine Project. It would also support the Company in the potential acquisition of prospective ground in the vicinity, to further discover this near-mine vicinity plus provide extra working capital for the Company.