Venus-1 will be set up as the first production well for a coal seam gas pilot pursuing flows of commercial gas.

The well has been drilled to a total depth of 715 metres and has been suspended with the rig being demobilised. Multiple coal intervals with excellent gas shows have been recorded with a preliminary interpretation of the wireline logs indicating ~ 25 metres of net coal pay.

The Juandah coals have been underreamed, a liner run over the underreamed section and a wellhead has been installed. The next phase will cover coil tubing jetting coal reservoir improvements over coal reservoirs that are highly gas saturated.

The Merger Of Equals

In July 2020, Real Energy and Strata-X Energy executed a Scheme Implementation Agreement. The Agreement was aimed to facilitate the acquisition of all the shares of Real Energy whereby each Real Energy shareholder will receive one share in Strata-X Energy (to be renamed Pure Energy) for every three shares held.

The merger remains subject to an array of conditions such as shareholder, court and regulatory approvals along with other customary conditions.

According to Chairman John Wardman, the proposed merger of Real Energy and Strata-X is a merger of equals. It is likely to create an extremely high potential and diversified gas portfolio. Initially, Pure Energy will have 100% of the following gas projects- 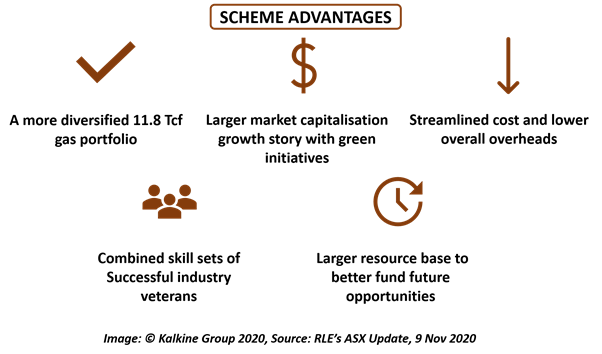 Over the next 12 months, Pure Energy aims to grow its reserves and resources to add value to its projects.

Is The Proposal Favourable For Shareholders?

The Real Energy Board believes that the proposal is in the best interest of Company’s shareholders. Besides the above outlined scheme advantages, the Board is confident that the merger to form Pure Energy may lead to a significant re-rating of Real Energy.

Below are few reasons cited in the Scheme Booklet, that entail why shareholders should vote in favour of the proposal- 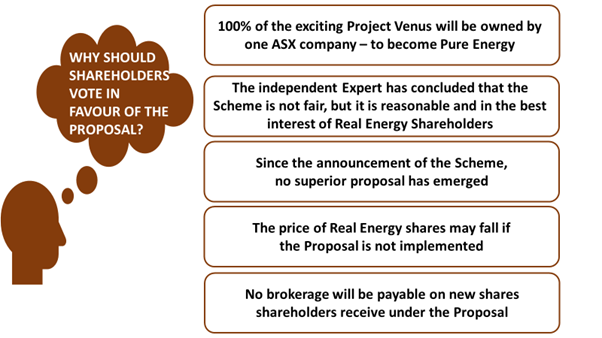 However, shareholders may disagree with the Board and the Independent Expert or the tax consequences may not suit shareholders’ financial position. It should be noted that if a shareholder votes against the proposal and the proposal proceeds, he/ she would no longer be a Real Energy shareholder and may have preferred the asset exposure in Real Energy rather than the combined group to become Pure Energy.

Meanwhile, each Company Director plans to vote or procure the voting of all Company shares held or controlled by them, in favour of the Scheme in the absence of a superior proposal. 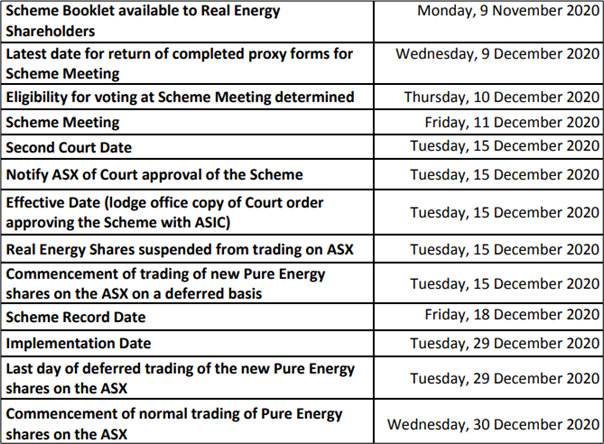