Ever since Venus-1 was spudded on 1 November 2020, Australian east coast focused gas company Real Energy Corporation Limited (ASX:RLE) has remained a hot topic for market participants. The Company has finally released a progressive report pertaining to the ongoing drilling activity at Venus-1.

Venus-1 is the first pilot CSG well in the 154km2 ATP 2051P area of Project Venus Joint Venture between Real Energy and Strata-X Energy. It is situated within the productive Walloon CSG fairway of the Surat Basin.

According to the latest Company report, it has reached a total depth of 715 metres.

Real Energy had previously suggested that the targeted total depth of the Venus-1 well is 680 metres. However, the well has surpassed the planned target, reaching a total depth of 715 metres, as per the Company’s ASX announcement from 6 November 2020.

The following significant observations have been made-

Current operations at the well are wireline logging.

Plan of Action Ahead

The Company has a robust plan charted out for the Venus-1 well. 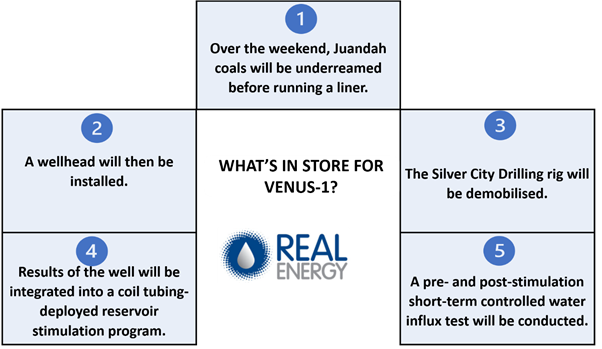 It should be noted that-

The results of the production pilot test will assist Real Energy in determining if expanding the pilot is the better option than starting an aggressive appraisal program in case commercial flow rates are achieved. The appraisal program will be designed to certify adequate reserves for the JV to secure gas sales agreements, enabling commercial field development.