The Queensland resources industry faced an unprecedented challenge with the onset of the COVID-19 pandemic in the first half of 2020.

The proactive measures aimed at containing the COVID-19 virus spread intertwined with volatility in commodity prices, which led to a decline in the exploration activity across Australia.

Impact of the Pandemic on the Queensland Mining Exploration

The exploration expenditure for minerals (except petroleum) decreased by 19% during the March quarter to $610.6 million against the previous quarter. Queensland registered a decline of ~26% to only $81.2 million.

However, the federal and state governments were proactive to take the preventive measures to mitigate the spread of the virus, while also managing the effects on the economy. Australia was one of the first countries to announce a stimulus package and further successive plans to boost mining and other important industries.

Following such moves, exploration expenditure has surged by ~42% to $115 million in Queensland and $744.9 million across Australia from the March to September quarters.

On 1 December 2020, the Queensland budget was presented, outlining the Economic Recovery Plan to combat the economic repercussions of the pandemic.

The state government took prompt action to implement a rent waiver for exploration permits and following the budget it has decided to extend it until March 2021 to better facilitate the exploration and development of future operating mines. 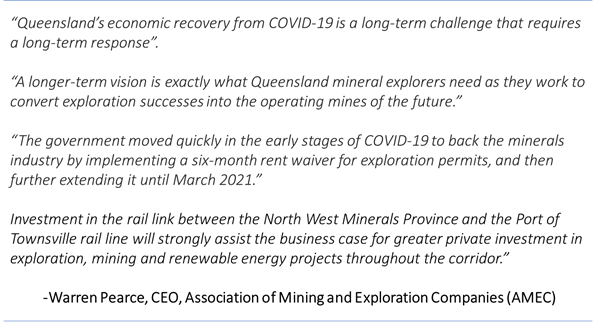 Vanadium and shale oil explorer, QEM Limited (ASX:QEM), is strategically progressing  one of the largest vanadium deposits globally, its flagship Julia Creek project. This project is an exceptional opportunity located within the North West Minerals Province, hosting the only oil shale and vanadium combination project in the world, which enhances the project economics and significantly widens the market opportunities.

QEM is committed to delivering innovative energy solutions, with the potential to produce vanadium pentoxide and energy fuels.

Following its most recent exploration program, QEM upgraded the JORC-compliant vanadium resources to 2,760 million tonnes, with a grade of 0.3% V2O5, along with a 3C oil resource of 783 million barrels within the same orebody. 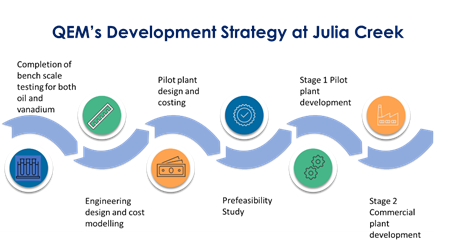 QEM recently completed vanadium and oil extraction tests, and continues to finalise the favourable beneficiation route for the optimal extraction yield. QEM is progressing further on the test programs with HRL Technologies to:

The project is advancing towards the targeted pre-feasibility study in 2021.

While the anticipation for demand of vanadium for the high-grade steel and alloy remains high, especially after China upgraded to new domestic rebar standards in 2018 , a trending market for vanadium may also be expected for the energy storage market with the Vanadium Redox Flow Batteries. Furthermore, the advancement in the extraction technology places QEM in an attractive spot to produce commercially-viable-and-profitable oil from shale at the project.