QEM recently concluded independent processing test work at Julia Creek, which revealed impressive extraction yield results for both oil and vanadium. The explorer has now initiated further test works to extend and build on upon the previous positive outcomes.

The latest test work is expected to be conducted under varying testing parameters, including additional extraction scenarios, additional reagents and test run times.

Must Read: QEM’s Julia Creek Project , an answer to the energy storage puzzle

The follow-up test works would be conducted by the Melbourne based HRL Technology Group, a NATA-accredited laboratory company, who completed the previous test works 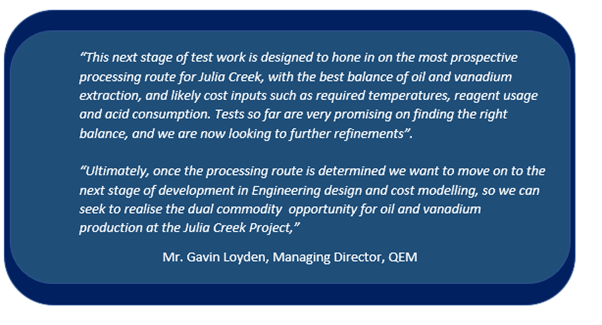 QEM anticipates the commencement of further test works as a major leap in progressing the dual commodity opportunity at Julia Creek, as the project swiftly ramps up towards pre-feasibility study stage.

QEM endeavours to establish itself as a leading producer of liquid fuel, facilitating Australia in easing up the current fuel crisis and a global supplier of high-quality vanadium pentoxide to the energy storage and the Australian steel sector.

Currently, Julia Creek holds one of the largest JORC code compliant vanadium resource in the world, at 2,760Mt with an average grade of 0.30% V2O5. It also contains a 3C Contingent Oil resource of 783 MMbbls, with oil yield averaging at 53 litres a tonne.