Invictus Energy Limited (ASX:IVZ) has been progressively exploring and appraising the Cabora Bassa Project in Zimbabwe. Invictus shares have been trading on the ASX since 2012. The shares soared up by ~6% to $0.054 on 3 November 2020.

Recently, Invictus released its activities report for the quarter ending September 2020- a period that denoted the achievement of several significant milestones- 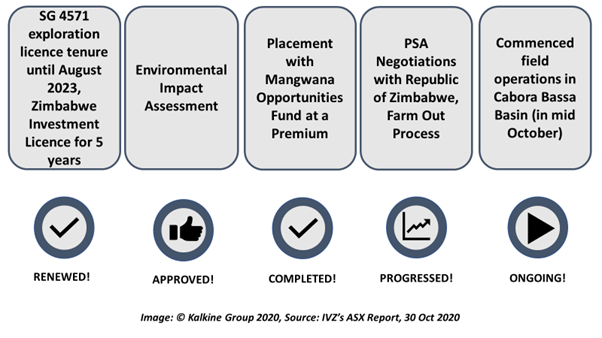 Exploration Licence Tenure: The tenure of the SG 4571 licence was extended for a further three years. Specifically, the exploration licence for the Second Period runs to August 2023.

Geo Associates (Pvt) Ltd, Invictus’ 80% owned subsidiary and holder of Special Grant 4571, received this significant approval from the Mining Affairs Board. Now, the publication in the Government Gazette will follow.

Invictus plans to undertake a comprehensive work programme in the extended period, including the commitment to drill a minimum of one exploration well.

Zimbabwe Investment Licence Tenure: Invictus also received approval of its application to renew the investment licence from the Zimbabwe Investment and Development Authority for 5 years. The licence provides formal recognition to Invictus as a foreign investor in Zimbabwe, facilitating access to several fiscal benefits and incentives.

Notably, Invictus is the only oil and gas operator in the NZ at present. To read about the Company’s strategic focus amid changing industry dynamics, CLICK HERE.

Concluding the permitting requirements, The Environmental Management Plan approval enables Invictus to start and undertake activities in the field including seismic acquisition and exploration drilling.

In the September quarter, Invictus completed a further placement (Second Tranche) under the share subscription agreement with Mangwana Opportunities Fund, that was announced in April 2020. The placement raised the equivalent of $222,148.

The agreement makes provision for a further equity investment by Mangwana for the project over the next 12-24 months besides supporting Invictus in accomplishing strategic goals in country.

Besides, cash and cash equivalents at end of September quarter amounted to $1,372,000.

Invictus continued its negotiations of Production Sharing Agreements (PSAs) with the Government of Zimbabwe via its parent Ministries and legal representatives. So much so, the drafts have been finalised. They are currently undergoing review by members of an Inter-Ministerial Committee (advised by an Independent Expert).

The process will facilitate the signing of the agreements in the near future and is expected to conclude soon.

Progress-wise, the Project has passed technical review/assessment. It is currently undergoing commercial evaluation, above ground due diligence and comprehensive forward program costing (involving drilling cost). In a COVID-19 restrictive work environment, Invictus is working as far as practical with the respective parties, to finalise outstanding requirements.

On a good note, travel restrictions in Zimbabwe have been eased recently. This paves the way for country visits and on the ground due diligence.

Subsequent to the end of the September quarter, the Company commenced field operations in the Cabora Bassa Basin in mid-October. This was majorly catalysed by the approval of the Environmental Management Plan, easing COVID-19 restrictions and the conclusion of cultural ceremonies in the Muzarabani as well as Mbire Districts.

As part of the field operations-

Reportedly, the program has progressed exceptionally well to date and is ahead of schedule.