Why are Galileo Mining (ASX:GAL) shares up over 140% today?

Share price of mineral explorer Galileo Mining Ltd. has skyrocketed over 140% by afternoon today. GAL's share price was at AU$0.48 a share by 1 PM, reaching a three-month peak. While the shares have not made any major moves in the near term, the sudden spike today seems to result from its announcement of a major Palladium-Platinum discovery at its Norseman project in Western Australia (WA).

At its Norseman project in WA, the six discovery drill holes dug by Galileo Mining Ltd. have returned significant mineralisation of precious metals like palladium, platinum, gold, copper, and nickel. Galileo is hopeful that these will turn into high-quality mining resources.

Galileo found 33 metres of assayed intersection within a 55-metre disseminated sulphide zone. The thick mineralised zones and extensive strike lengths are building hopes of getting a large mineralised system underneath. 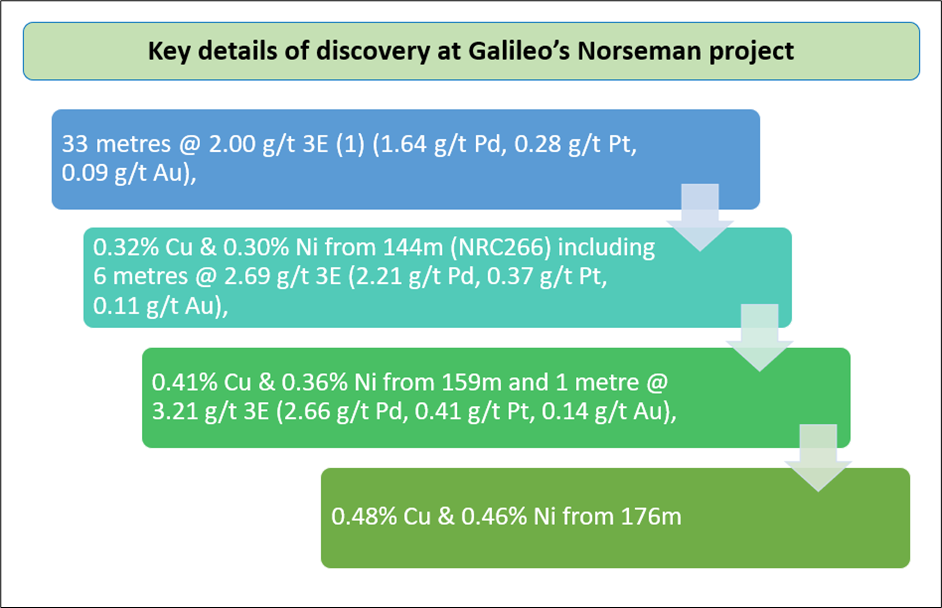 However, the discovery is on a granted mine lease, which will only convert to a resource if drilling is successful. Galileo has renamed the mine lease prospect as the Callisto discovery.

In addition to the discovery, Galileo has also found multiple PGE-nickel-copper targets at its Jimberlana and Mission Sill prospects offering opportunities for further discoveries. Galileo has control of virtually the entire prospective areas. Another noteworthy fact is that significant early-stage palladium results in aircore drilling have been returned at Mission Sill and Jimberlana prospects.

According to the company’s management, Galileo remains fully funded at the end of the March quarter. It can also continue aggressive exploration programs at all its projects with the available AU$8.2 million funding.

The work program in 2022 at Galileo’s Norseman project includes assaying all drill holes in the current RC program. Downhole EM surveying selected drill holes and petrography of selected samples for rock classifications. It also includes a 2,000 to 5,000 metre RC drill program at the Callisto alongside RC drilling of EM and geochemical targets at Jimberlan. Galileo shall also undertake IP and surface EM surveying of geological targets at its Mission Sill prospect. An aircore drilling of an untested 4 km prospective contact zone at the Mission Sill prospect is also part of the plans. However, how well Galileo’s plans get translated into effective and profitable actions will only be known with time.